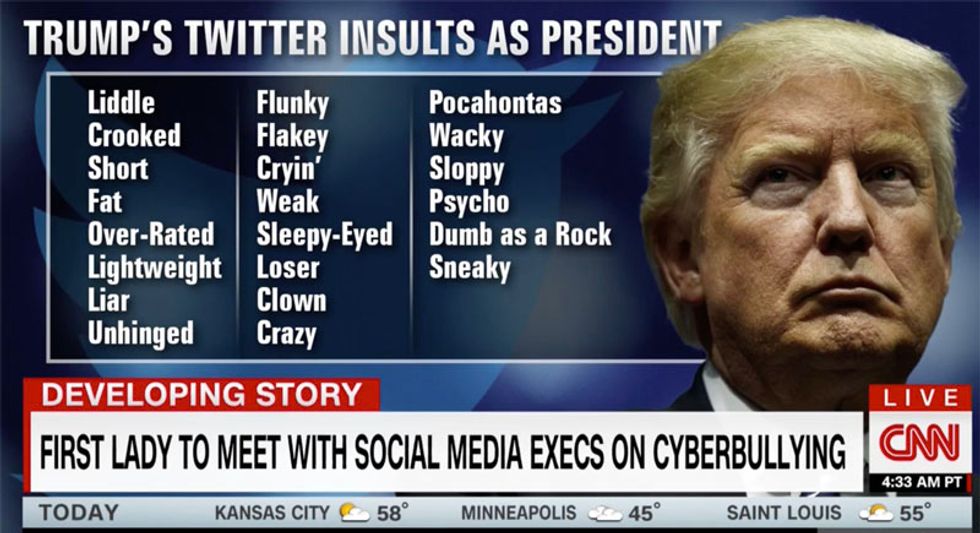 "Next week, First Lady Melania Trump is hosting a gathering at the White House where she will speak with social media executives about helping to prevent cyberbullying and expected to talk to them what they have done to combat online harassment," host Paul began.

Host Paul then interrupted that narrative to talk about cyberbullying and used President Donald Trump's tweets as exhibit A.

"Let's take a look at a list here that has been compiled by Victor doing his research of insults that the president has used via Twitter," Paul said as the onscreen graphic showed an extensive list of insults Trump has deployed at his foes. "It goes on and on. With that said, people -- a lot of people view him as being guilty of online bullying. What is Melania's Trump influence at this meeting given what we see from her husband?"

"Melania Trump's office has said to me, when I asked about her about her tackling a topic of cyberbullying is flying in the face of her husband, and her office says she doesn't care," Bennett replied. "Nothing about what she is doing that really is cohesive with the president in terms of her messaging and that is fine with her as she is independent."