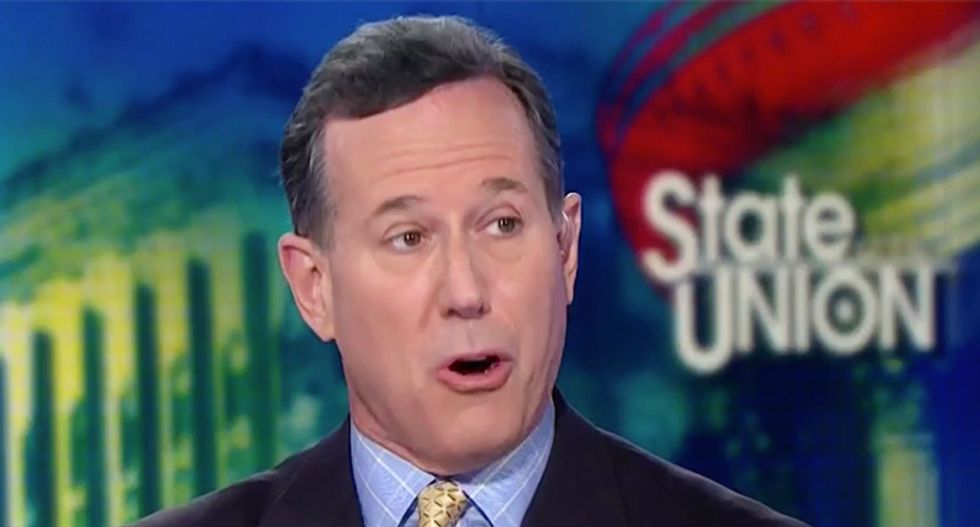 Former Republican Senator Rick Santorum grew incensed on Sunday morning with the Parkland teens who were behind the massive #MarchToSaveOurLives on Saturday that drew an estimated 800,000 participants to the nation's capital, saying their time would be better served learning life-saving techniques.

Appearing on CNN's State of the Union with fill-in host Briana Keilar, the former lawmaker said he appreciated the march, but that the the teens need to focus on how to respond to future shootings.

Santorum began by accusing "Hollywood elites" of being behind the movement that saw marches in hundreds of U.S. cities.

"This is the bottom line," Santorum lectured. "Is this a political effort? Is this a political movement? It very well may be, and that's fine, people certainly supported it.  But if it's the Hollywood elites and the liberal billionaires who funded this, it's all about politics. Or is is it about keeping our schools safe?"

"If it's about keeping schools safe, we need a broader discussion," he then suggested. "How about kids taking CPR classes or trying to deal with situations if there is violence?"

"Yeah, they took action to ask someone to pass a law, but they didn't take action for how do I, as an individual, deal with this problem?" Santorum heatedly replied. "How am I going to stop bullying within my own community? What am I actually going to do to an issue? Those are the kinds of things you can take internally and say 'Here's how I'm going to deal with this and help the situation,' instead of going and protesting and saying someone else needs to pass a law to protect me."

CNN regular Van Jones pointed out that he has a child who will be attending high school next year, before adding, "I'm proud of these kids."

"I'm' proud of them too," Santorum parried. "But ignoring the problems and saying some phony gun law is going to solve it -- phony gun laws don't solve these problems. That's what we found out."