Watch: Frantic Florida lawmaker has a complete meltdown in bonkers AM Joy interview about arming teachers 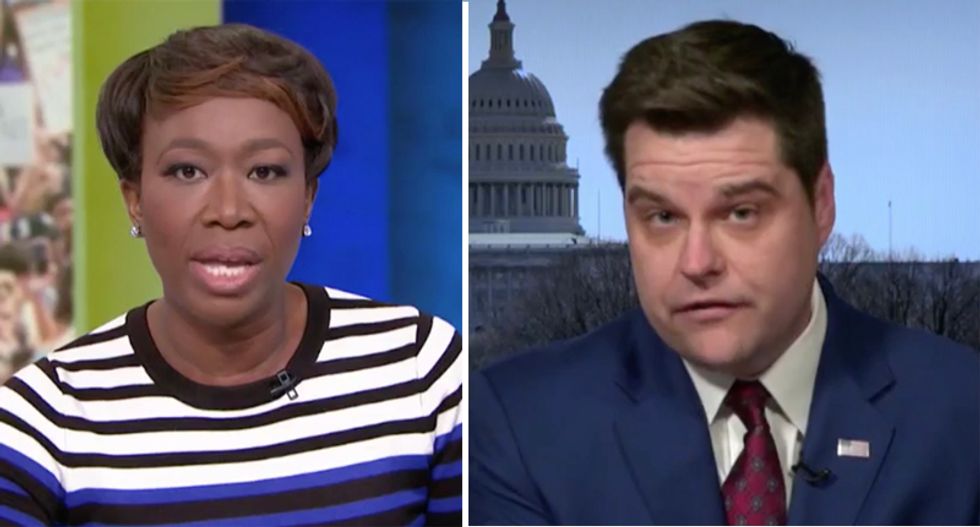 In a interview that occasionally spiraled into chaos, MSNBC host Joy Reid peppered a Florida congressman about his knowledge of gun laws and the history of restrictions on weapons, that turned into a shouting match with the congressman.

Appearing on AM Joy, Rep. Matt Gaetz (R-FL) pressed for "multipliers of force" on school campuses who engage in crossfire with potential shooters as way to make schools safer.

In one telling moment, Gaetz said he had strong support in his district for the NRA, telling host Reid that Florida is a pro-NRA state with a membership of over a million, only to have the host correct him and inform him that NRA only boasts 300,000 members in his state.

"How many people live in Florida ?" Reid asked.

"So 300,000 people in Florida are ruling over and making laws for 20 million people," Reid shot back.

"It's not just the membership of the NRA," Gaetz deflected. "There's countless people beyond dues-paying members of the NRA who support the NRA."

The conversation moved onto arming teachers, with Gaetz maintaining a well-armed collection of former soldiers like those who served in Fallujah could be stationed at schools which, in turn, stunned Reid.

"You want to turn our schools into Fallujah?" she asked, which set off an another round of talking over each other.

"Have you ever taken live fire?" Reid pressed.

"No, I've not taken live fire," Gaetz replied after first saying he had.

"You've never been in a situation where somebody is shooting at you," Reid lectured, "but you're interpreting in your expertise, as somebody who has never been in law enforcement and never had anyone shoot at you, that a teacher should be equipped to fire back at a mass shooter who is prepared to die, who has acquired a weapon that is just below an M-16, you've never experienced that live fire."

Watch the videos below via MSNBC: