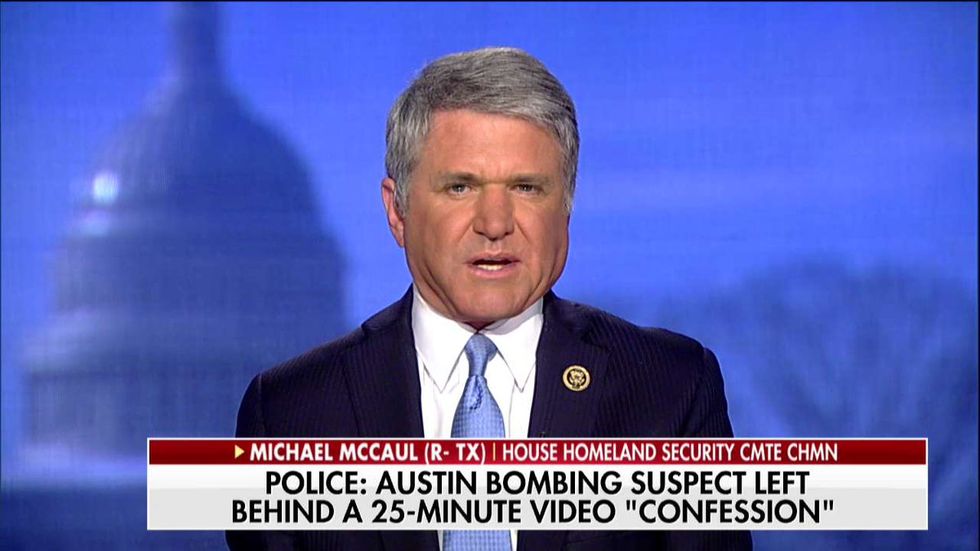 Rep. Michael McCaul (R-TX) went on Fox News Thursday to discuss the serial bombings that occurred this past week in Austin, Texas.

Fox host Bill Hemmer started off by saying that Austin bombing suspect Mark Anthony Conditt appeared to be a case of "home-grown terror," but McCaul quickly jumped in to dispute that assertion, and said that police had found nothing in Conditt's video confession -- which police recovered from his phone after he took his own life earlier this week -- that suggested a political motive.

"I think it's clear from the confession that it's not terror-related, although it did terrorize the city of Austin for the last month," he said. "I think it was a disturbed young man, a mentally ill-type person."

While it's true that Conditt's confession didn't include any mention of political motivations, police also say that it didn't offer any real clues as to what motivated Conditt to go on a bombing spree this month.

"I know everybody is interested in a motive and understanding why," Austin police Chief Brian Manley said of the video. "And we're never going to be able to put a (rationale) behind these acts."

Watch the video of McCaul's interview on Fox below.