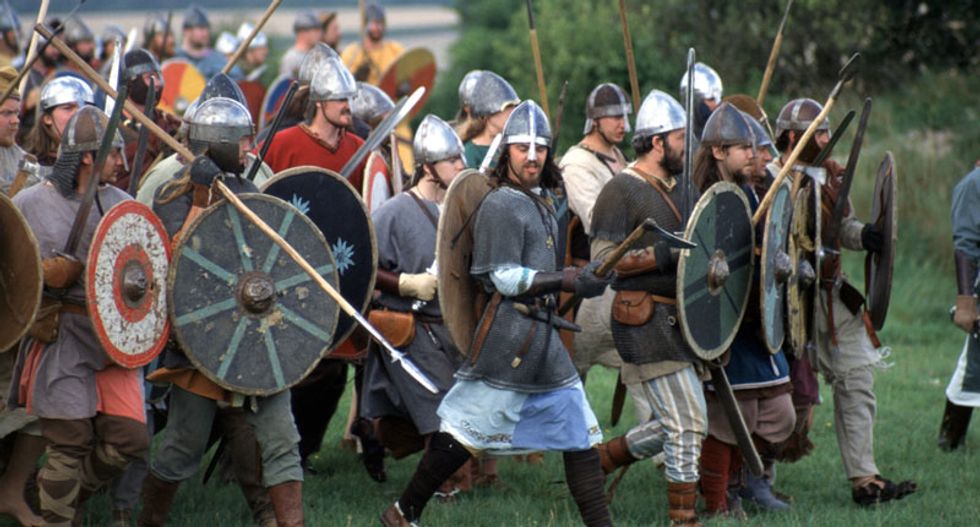 The idea that there is a common Anglo-Saxon ancestry based on biology is gaining currency among some right-wing and religious groups in the UK and US.

In the UK, the new leader of the UK Independence Party, Henry Bolton, suggested in a radio interview in October that “in certain communities the indigenous Anglo-Saxon population is nowhere to be seen.”

In August, a religious group called the Odinist Fellowship wrote to the Church of England demanding two churches as reparations for a “spiritual genocide” which it claims began in the seventh century AD.

The Odinists use old Icelandic texts to reconstruct the “indigenous” religion of the Anglo-Saxons which they claim was oppressed with the arrival of Christianity. The Anglo-Saxons are commonly believed to have migrated into Briton in the fifth and sixth century AD. Iceland by contrast was inhabited in the ninth century by Viking settlers. In the US, this mixed up medievalism is associated with the white supremacist alt-right who use Anglo-Saxon and Viking motifs.

But archaeological research, which examines ancient DNA and artefacts to explore who these “indigenous” Anglo-Saxons were, shows that the people of fifth and sixth century England had a mixed heritage and did not base their identity on a biological legacy. The very idea of the Anglo-Saxon ancestor is a more recent invention linked closely with the English establishment.

Listen: The Anthill podcast episode on myths includes a segment on myths about race

For decades, archaeologists and geneticists have sought to identify Anglo-Saxons in England. An early attempt in 2002 relied on modern DNA with a study of the male Y chromosome suggesting there had been a 95% population replacement of Britons by the Anglo-Saxons, comprised of different people from Northern Europe. But another study, based on mitochondrial DNA which is inherited from the mother, found no evidence of significant post-Roman migration into England. A third paper suggested that the genetic contribution of the Anglo-Saxons in south-eastern England was under 50%.

The discrepancies between the findings are because these three papers used modern DNA and worked backwards. Work my colleagues and I have undertaken looked at the question from the other direction – by working with ancient DNA.

The results from our recent study were published in Nature Communications and included evidence from an Anglo-Saxon site I excavated in Oakington, Cambridgeshire. In total ten skeletons were investigated. These included seven early medieval graves dating to between the fifth and eighth century – four from Oakington and three from Hinxton – and three earlier Iron Age graves from Cambridgeshire, dating to between the second century BC and the first century AD, to provide the genome of the antecedent inhabitants of Briton.

We used a novel method called “rarecoal” to look at ancestry based on the sharing of rare alleles, which are the building blocks of genes. Our research concluded that migrants during what’s now thought of as the Anglo-Saxon period were most closely related to the modern Dutch and Danish – and that the modern East English population derived 38% of its ancestry from these incomers. The rest of Britain, including today’s Scottish and Welsh, share 30% of their DNA with these migrants.

The analysis of DNA of four individuals from the Oakington Anglo-Saxon cemetery identified that one of them was a match with the Iron Age genome, two were closest to modern Dutch genomes, and one was a hybrid of the two. Each of these burials was culturally Anglo-Saxon because they were buried in the same way, in the same cemetery. In fact, the richest assemblage of Anglo-Saxon artefacts came from the individual with the match for Iron Age genetic ancestry, and so was not a migrant at all.

It shows that these ancient people did not distinguish biological heritage from cultural association. In other words, someone who lived and died in the fifth or sixth century Anglo-Saxon village of Oakington could have been biologically related to an earlier inhabitant of England, a recent migrant from continental Europe or a descendent of either or both – they were all treated the same in death.

Biologically then these people were a mixed group who shared what we consider Anglo-Saxon culture. But they did not think of themselves as Anglo-Saxons.

The idea of the Anglo-Saxon is a romanticised and heavily politicised notion. When Gildas, a sixth century Monk wrote De Excidio et Conquestu Britanniae (On the Ruin and Conquest of Britain) he referred only to Saxons. Writing 200 years later, the Venerable Bede used the word “Anglorum” in his ecclesiastical history to describe a people unified under the church. In the ninth century, Alfred the Great used the term Anglo-Saxon to describe the extent of his realm – but this description did not persist.

It was not until the 16th century that pre-Norman people were consistently described as Anglo-Saxons. Previously, stories like the 1485 Le Morte d'Arthur, by Thomas Malory, romanticised Arthurian antagonists who defended Britain from invading Saxons. This origin story was important enough to late medieval Englishness that Henry VIII installed a round table in Winchester castle.

A convenient, but inaccurate labelIt was not until the 19th century that Anglo-Saxon poems such as Beowulf, the Seafarer and the Wanderer were translated into English as interest in Anglo-Saxons grew. In London’s National Portrait Gallery, there is a statue of Queen Victoria and Prince Albert of Saxe-Coburg and Gotha dressed as Anglo-Saxon monarchy – a commission that equated their Germanic descent with that of their subjects. This Anglo-Saxon origin story has its roots in politics, downplayed when anti-German sentiment during World War I prompted the royals to change their name from Saxe-Coburg-Gotha to Windsor in 1917.

The people of the fifth, sixth and seventh century certainly did not think of themselves as Anglo-Saxons and would not have understood the description. Migration into the UK took place in deep prehistory, throughout the Roman and post-Roman periods – a fact which the Classicist Mary Beard was lambasted for defending on Twitter in August.

Migration then continued with Viking settlement in the ninth and eleventh centuries. Dutch and European migration into England was present throughout the middle ages and particularly pronounced in the 16th and 17th century as Flemish weavers fled religious persecution.

Today, the term Anglo-Saxon is a convenient label for those opposed to future immigration. While it collectively describes some post-Roman and early medieval culture, it has never accurately described a biological ethnicity nor an indigenous people. The DNA evidence points to an integrated people of mixed ancestry who lived side by side.

Anglo-Saxon ancestry is a modern English myth – the English are not descended from one group of people, but from many and that persists in our culture and in our genes.

To hear more on myths about race, listen to the December episode of The Anthill podcast on myths, featuring an interview with Duncan Sayer.

By Duncan Sayer, Reader in Archaeology, University of Central Lancashire