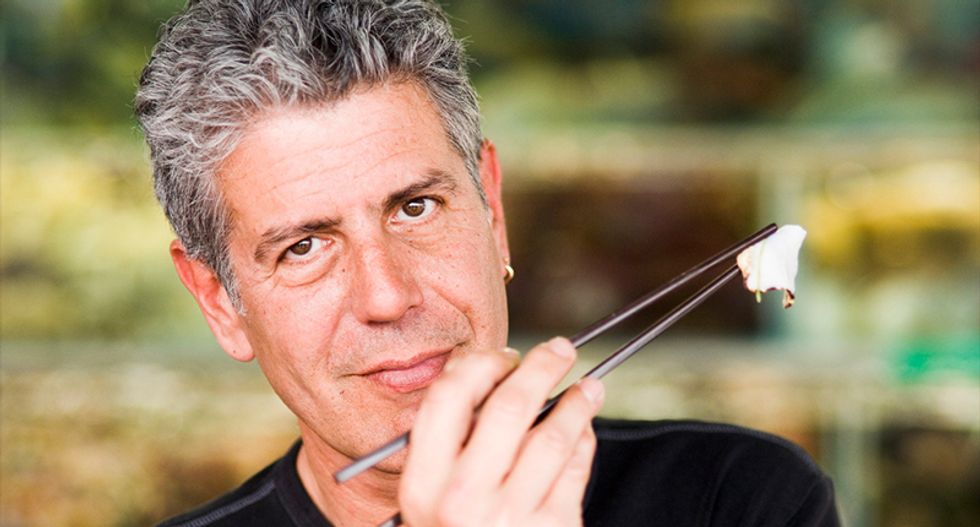 Anthony Bourdain's "Parts Unknown" is beginning its 11th season with a trip to West Virginia. The man who has tried food in some of the most challenging locations around the world is now going into the heart of President Donald Trump's stronghold.

The chef turned food critic has visited such far-flung places as Myanmar, Saudi Arabia, Libya, Iran, the Congo and Gaza, but the opening of this latest season left him “disarmed.”

While the Daily Beast might find it shocking that people in red-state America are friendly, thoughtful and caring people, Bourdain explained to the site how the blue-collar state is "more nuanced" than he expected.

“I like food. It was the center of my life for 30 years and I’ll always look at the world through that prism, but it is not the only thing,” Bourdain explained about how his travels have become cultural explorations. “If you’re commenting on how crunchy-delicious your salad is while your host is missing two limbs, you might want to ask them how that happened, and often you will get a story that’s far more interesting than what’s on your plate.”

"I was curious, and I was utterly disarmed and very moved by what I found there," he said. "People were incredibly kind and generous to me, not hostile to my political beliefs, and we talked a lot about coal, the Second Amendment, and why people who come from five generations of breaking their backs in the coal mine would vote for a sketchy New York real-estate guy who’s never changed a tire in his life. The answers were a lot more nuanced than I’d expected."

Despite being further north, the antidote about "southern hospitality" rings true in West Virginia. He noted the contemptuous tone with which the far-left fringe disses places like West Virginia "is sort of disgraceful and counterproductive and unlovely."

He urged "a little understanding and a little empathy—the ability to walk in someone else’s shoes for a few minutes" at a time when politics is contentious, inflammatory and angry. He went to West Virginia with the intention of being "respectful and sympathetic."

When it comes to Trump, he noted that those he spoke with in the state understand the president probably won't bring coal back to where it once was. Instead, they are searching for a way to ensure they can get dinner on the table tomorrow and the following day.

A significant amount of his adventure involved discussions about guns. In one case, Bourdain is in the back yard of someone whose "business is modifying modifying semi-automatic weapons." He ended the segment hoping there would be some middle ground.

"They were really nice and I liked them, but as you saw, they were not willing to give an inch on their position. They were non-negotiable in their view," he told the Daily Beast.

"Learning to shoot and then dress and cook a squirrel is something that a lot of kids learn," Bourdain explained. It's part of the culture. "From what I could see, they were responsible gun owners—very rigorous about safety, training."

The CNN host also described his 2013 interview with Russian President Vladimir Putin critic Boris Nemtsov, who was shot and killed nine months after their interview.

"I ask [Nemtsov] directly, 'Aren’t you concerned? The enemies of Vladimir Putin, bad things have happened to them,' and he laughed it off and said, 'It would be too embarrassing. I’m too important. I’m a public figure,'" Bourdain recalled. "One has to wonder if that was in somebody’s mind as they shot him to death pretty much on the front lawn of the Kremlin. It’s not like they don’t want you to know who done it, you know? When they kill somebody with nerve gas or radioactive polonium in Central London, they want you to know who done it. That’s the whole point."

He confessed that while he'd still be welcome back into Russia, despite mocking Putin the entire episode, he doesn't "want a camera on me when I’m sitting on the toilet."