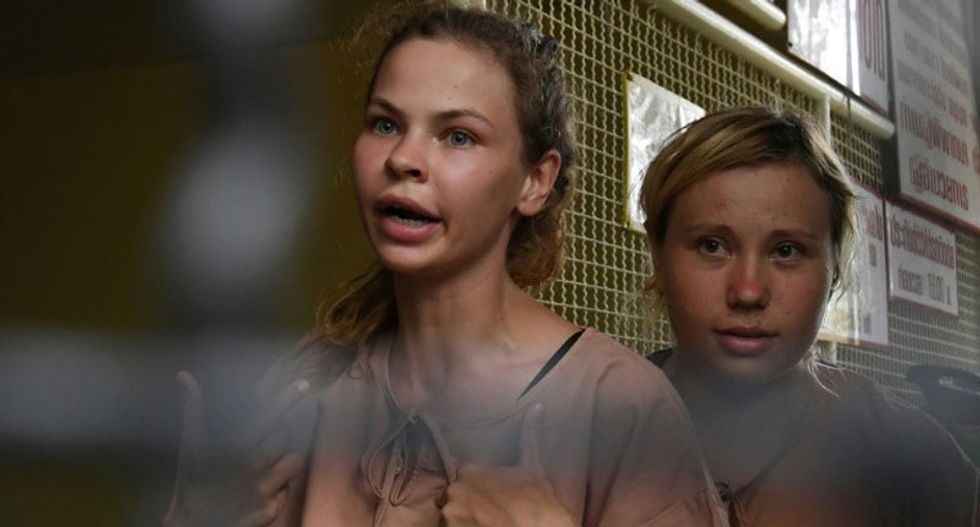 Vashukevich arrives with an unidentified fellow detainee at a holding cell to face trial in Pattaya. (AFP / Lillian SUWANRUMPHA)

A Belarusian model detained in Thailand accused the Kremlin of trying to jail her and her colleagues at a court hearing on Tuesday, in a case that grabbed headlines after she made cryptic offers to reveal secrets about alleged Russian meddling in the 2016 US election.

Anastasia Vashukevich, known by her pen name Nastya Rybka, has been held in Thailand since she and nine other foreigners were arrested in February by police who raided their "sex training course" in the seaside city of Pattaya.

They were initially charged with lacking work permits but some are now facing additional charges of soliciting prostitution and criminal association, according to Apichai Krobpetch, Pattaya's police chief.

Reporters were barred from observing the plea hearing over the work permit charge on Tuesday and court officials refused to comment on the proceedings.

But in brief remarks to reporters as she and other defendants were escorted back into a police van after the hearing, Vashukevich alleged that "the Russian government is trying to get us jailed".

"Why are they trying to prevent us from disclosing to Americans the information we have here in Thailand? Why do they want to hide it from the world and from journalists?" she said.

The Russian Embassy did not respond to requests for comment.

Vashukevich, who is embroiled in a political scandal back in Russia, first made international headlines after she addressed American journalists in a desperate video posted on Instagram after her arrest in February.

"I am ready to tell you about all those missing puzzle pieces that you lacked... regarding a link between our esteemed lawmakers and (Paul) Manafort, Trump and all this brouhaha, the US elections," she said in the video.

The model, who has written a book about seducing oligarchs, has not substantiated her claims but does have links to Russia's elite.

She and her associate Alex Kirillov, a self-styled Russian sex guru who was among those detained and brought to court on Tuesday, are facing a lawsuit back in Russia filed by billionaire tycoon Oleg Deripaska.

Deripaska, one of several Russian oligarchs sanctioned by the US this month, sued the pair over footage Vashukevich filmed purporting to show him treating an influential deputy prime minister, Sergei Prikhodko, to lavish hospitality on his yacht.

The video went viral after it was published by top Kremlin critic Alexei Navalny in February.

Deripaska, who Washington has accused of operating for the Russian government, denied any wrongdoing.

Vashukevich and Kirillov have expressed fear of being deported back to Russia and called on the US for help.

The US embassy in Bangkok has repeatedly declined to comment on the case.

Deripaska, an aluminium tycoon, was once an associate of US President Donald Trump's ex-campaign manager Paul Manafort.

Manafort has been indicted on money-laundering and tax-related charges as part of the special counsel's investigation into Russian interference in the 2016 US election.