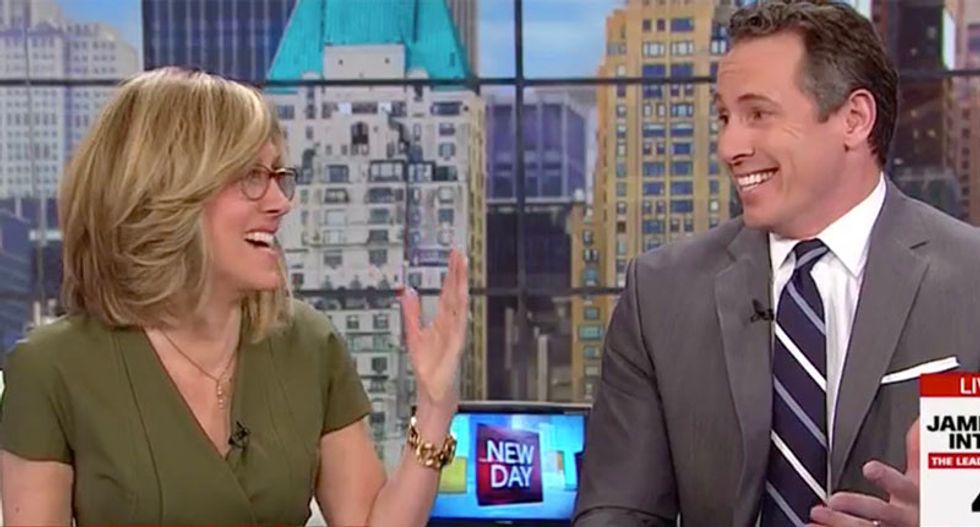 Taking up a Wall Street Journal article where a legal adviser to President Donald Trump said he expected Trump attorney Michael Cohen would flip on the president, a Chris Cuomo-led CNN panel laughed and marveled at the latest legal follies that have enveloped Trump.

"Here's what happened," the New Day host began. "One of the president's long-time legal advisers warns President Trump that Michael Cohen could flip on him as he is facing potential jail time in a criminal investigation. Now that is very, very early on in an analysis. We haven't had any charges. there is no indictment against Michael Cohen."

"So this man, Jay Goldberg, who has worked with the president in the past, two different divorces he's done," Cuomo elaborated. "We must presume he's a family law specialist and people don't freelance in divorce work. For some reason he said the president called him for advice. I don't know what he was asking for advice on, but somehow in that conversation he wound up discussing Michael Cohen and his possibility of flipping. That nobody who is facing 30 years stands up. We don't know that Michael Cohen is facing that."

"It's interesting that the long-time divorce attorney spoke to Gloria Borger and shared this with her," Camerota offered before laughing and adding. "What happened to attorney-client privilege?"

"Maybe he [Trump] is right, it is dead," Cuomo quipped. "First of all, it's just a weird thing to say. Donald Trump should not want Jay Goldberg to suggest that Michael Cohen will flip on him. He is a friend and someone he considers family, so this is insulting for Michael Cohen. To him to go out and talk about this is also strange. I don't get it."