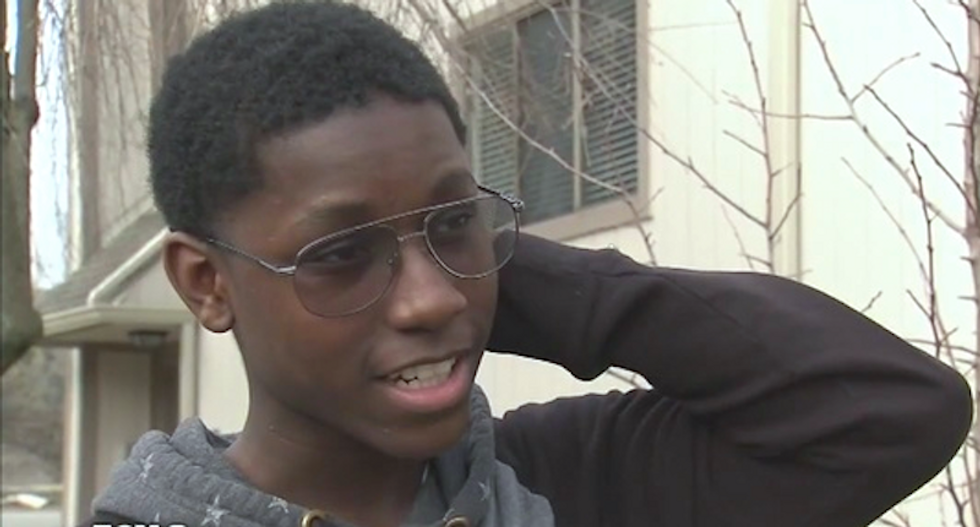 A black teenager was nearly shot and killed by a racist homeowner after missing his bus and trying to ask a neighbor for directions.

Brennan Walker overslept Thursday morning and missed his bus, so he started walking the bus route from his family's home to Rochester High School, reported WJBK-TV.

The 14-year-old's mom had taken his phone away, so he wasn't able to check it for directions -- so the boy knocked on a stranger's door to ask for help.

"I got to the house, and I knocked on the lady's door," Brennan told the TV station. "Then she started yelling at me and she was like, 'Why are you trying to break into my house?' I was trying to explain to her that I was trying to get directions to Rochester High, and she kept yelling at me."

"Then the guy came downstairs, and he grabbed the gun," the teen added. "I saw it and started to run -- and that's when I heard the gunshot."

The shot missed the fleeing teen, and Brennan said he kept running until he found a hiding place, and that's when he broke down crying.

"My mom says that black boys get shot because sometimes they don't look their age, and I don't look my age," he said. "I'm 14, but I don't look 14. I'm kind of happy that, like, I didn't become a statistic."

The teen's mother was at work when she got a call about the incident, and she at first feared bad news about her husband, who is deployed in Syria -- and she then became angry.

"That's exactly how I feel, like, wow -- because you were trying to get to school," said parent Lisa Wright. "I found out later the only reason [the man] missed is because he forgot to take the safety off."

The gunman had a security camera on his doorbell that recorded the incident, and investigators reviewed the video with Brennan and his mother.

"One of the things that stands out, that probably angers me the most is, while I was watching the tape, you can hear the wife say, 'Why did these people choose my house?'" Wright said. "Who are 'these people?' And that set me off. I didn't want to believe it was what it appeared to look like. When I heard her say that, it was like, but it is."

"We should not have to live in a society where we have to fend for ourselves," she said. "If I have a question, I should be able to turn to my village and knock on a door and ask a question. I shouldn't be fearful of a child, let alone a skin tone."

"This is a decent neighborhood," Wright added. "If anything -- why would I knock on your door to rob you?"

The Oakland County sheriff agreed with Wright, and he plans to pursue charges against the homeowner.

"It is just absurd that this happened," said Oakland County Sheriff Michael Bouchard. "I feel terrible for the young man, I feel terrible for the mom and the anxiety that they had to go through. We are going to ask for every charge permissible for this guy, who stepped up and fired a shotgun because someone knocked on his door."

The man, whose name has not yet been released, remains jailed and will be arraigned Friday.