Bowhead whales not only singers, but avid composers too 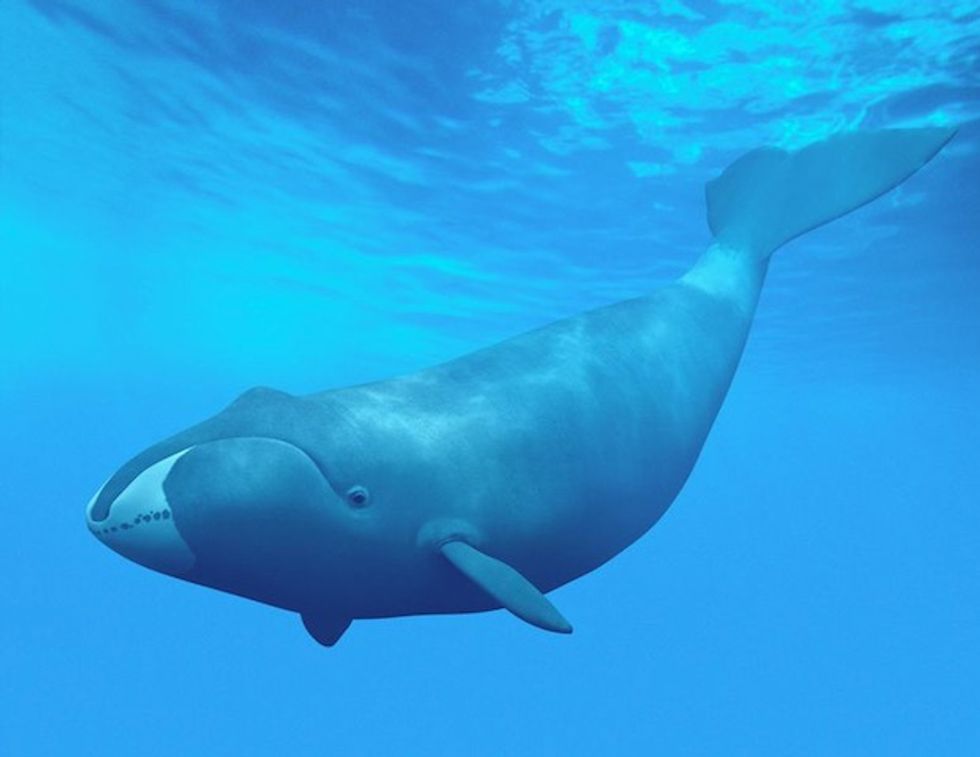 How do bowhead whales in the unbroken darkness of the Arctic's polar winter keep busy during breeding season?

Why, they sing, of course.

From late fall to early spring, off the east coast of Greenland, some 200 bowheads serenade each other with compositions from a vast repertoire of song, according to a study published Wednesday.

"It was astonishing," said lead author Kate Stafford, an oceanographer at the University of Washington's Applied Physics Laboratory in Seattle who eavesdropped on these subaquatic concerts.

"Bowhead whales were singing loudly, from November until April" -- non-stop, 24/7 -- "and they were singing many, many different songs."

Stafford and three colleagues counted 184 distinct melodies over a three-year period, which may make bowheads one of the most prolific composers in the animal kingdom.

"The diversity and interannual variability in songs of bowhead whales in this study are rivalled only by a few species of songbirds," the study found.

Unlike mating calls, songs are complex musical phrases that are not genetically hard-wired but must be learned.

Only a handful of mammals -- some bats and a family of apes called gibbons, for example -- vocalise in ways akin to bird song, and when they do it is quite repetitive.

The only other whale that produces elaborate songs is the humpback, which has been extensively studied in its breeding grounds near Hawaii and off the coast of Mexico.

The humpback's melody is shared among a given population over the period of a year, and gives way to a new tune each spring.

Bowhead whales, in turns out, are far more versatile and would appear to improvise new songs all the time.

"If humpback whale song is like classical music, bowheads are jazz," Stafford said in a statement. "The sound is more free-form."

Over the course of four winters, not only were bowhead song types never repeated between years, each season had an entire set of new songs, the researchers found.

It is not know if only bowhead males sing, as appears to be the case with humpbacks.

Nor do scientists understand why -- from an evolutionary perspective -- bowheads change their songs so frequently. "In terms of behavioural ecology, it's a great mystery," Stafford said.

Bowheads live only in the Arctic region and can grow up to 20 metres (more than 60 feet) in length, second only to blue whales.

They can break through sea ice at least 18 centimetres (seven inches) thick using their heads as ramming rods, and clear the water's surface when they breach.

For the study, published in the British Royal Society's Biology Letters, Stafford and her team recorded bowhead songs year-round in the Greenland Sea's Fram Strait, which connects the North Atlantic and Arctic Oceans.

Based on the recovery of stone harpoon tips in blubber and analysis of eye tissue, scientists believe bowheads can live more than 200 years.

The species as a whole is doing well, numbering well over 10,000, according to the International Union for the Conservation of Nature's (IUCN) Red List.

But the Spitsbergen sub-species monitored for the study is listed as critically endangered, its numbers reduced from at least 24,000 at the turn of the 17th century to about 200 today.