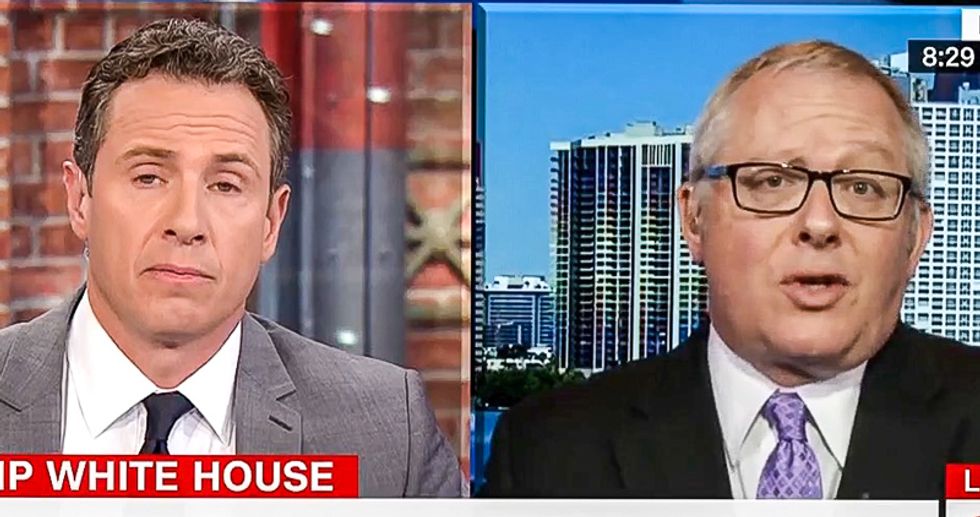 Former Trump campaign staffer Michael Caputo on Monday defended embattled EPA Director Scott Pruitt by arguing that a string of ethics violations have been largely invented by "leftists" who are out to get him.

During an interview with Caputo on CNN's New Day, host Chris Cuomo wondered if President Donald Trump would remove Pruitt after a number of Republicans said that his ethics abuses must stop.

Caputo argued that Republican are "really proud" of the work Pruitt is doing to slash EPA regulations.

"It's the most difficult work when you are opposing liberal orthodoxy," Caputo continued. "Probably number two target in this administration after President Trump is Scott Pruitt. Because he's doing things that are very effective at the EPA. Like for example, cutting the budget by 30 percent -- and that triggers the kookiest leftists."

The CNN host, however, put the policy aside to continue talking about Pruitt's ethics abuses.

Caputo acknowledged that Pruitt may have done something wrong.

Cuomo interrupted: "I get the whole political currency of pointing the finger at the other side... who in the Obama administration got caught up in this string of arguable ethics violations."

"I'm not going to go tit for tat," Caputo complained.

"You just did!" Cuomo remarked.

Caputo asserted that Pruitt's alleged ethics violations -- including a 19-person security detail -- were reasonable because the EPA director is under attack by liberals.

"He's been targeted and even yelled and screamed at and attacked by triggered leftists," Caputo ranted. "We're talking about him trying to save a few bucks on the overheated apartment market in Washington."

"Fifty bucks a month that he doesn't even pay?" Cuomo pointed out.

"I expect the president to stand by him until something that comes out that really requires him to be replaced," Caputo said. "I think that he's doing great work over there. He's reforming the EPA in a way that conservative want to have done. And that's the real problem here. He's effective so the busybody bureaucrats of the EPA want him out."

"I get that," Caputo stated. "You look at the people who are dragging the EPA chief right now. They're kind of a familiar cast of characters."

"At most, he just needs to apologize and move on," he added. "And continue to cut that agency down to size.