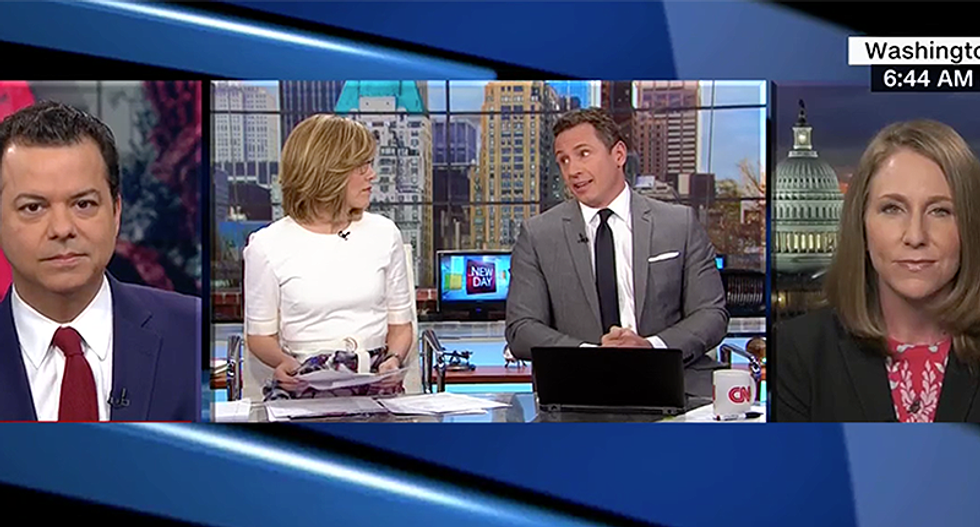 Over the weekend, Trump quoted Fox News host Jesse Watters, "The FBI closed the case on Hillary, which was a rigged investigation. They exonerated her even before they ever interviewed her, they never even put her under oath.”

"And much more. So true Jesse!" Trump commented on the quote.

“The FBI closed the case on Hillary, which was a rigged investigation. They exonerated her even before they ever in… https://t.co/Xg0ZLHYGHu
— Donald J. Trump (@Donald J. Trump)1523186869.0

As a fact check, everyone questioned by the FBI is presumed to be under oath because it’s illegal to lie to the FBI. However, the CNN panel noted, this tweet has significant implications for his own investigation.

"As we know, President Trump believes an investigation is a hoax if the subject of the investigation is never interviewed," host Alison Camerota said. She went on to quote The Washington Post's Brian Klaas, who explained that if Trump isn't interviewed by Mueller, it too would be considered "rigged" under that same logic.

"I mean, just walking into a trap, Mr. President, is not exactly complicated to figure out," Daily Beast editor John Avlon said. "How dare we apply logical, consistent standards on the president's tweets or decision-making process. He set it all up, right there."

Avlon recalled that Trump has said over and over again that he wants to testify and do so "under oath."

"He said repeatedly, he wants to testify. Presumably, he feels he has nothing to hide. And I can say from a political perspective, if he doesn't testify, this all remains open. We'll forever have questions around it and questions around whether Mueller can change the probe. Obviously, with the president's allies, allegedly past lawyers have been concerned that he could move from subject to target based on on ambling around and creating contradictions with his testimony as he is want to do."