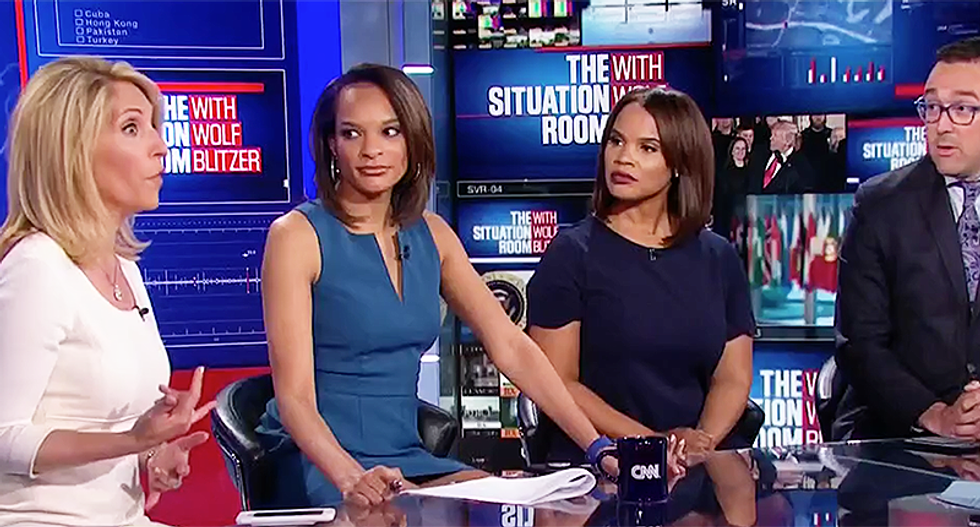 President Donald Trump called into Fox News's morning show "Fox & Friends" Thursday and the interview went completely off the rails quickly. In their afternoon commentary, Wolf Blitzer's political panel couldn't help but note that Trump seemed like he was spitting fire straight into the phone.

The segment began by playing a short clip of the 30-minute long tirade.

"That we just heard from the president -- never mind that the president of the United States just called in a cable news show he likes to watch for 30 minutes, OK? Take that aside. You know, that is not a typical scenario," explained CNN's Dana Bash. "But the tone. He was yelling! He was so agitated."

She said that she could almost picture Trump, "red in the face."

"And that was the sort of the theme and the thing that we heard from him throughout most of the phone call," she continued. "That is not a president when you're talking about the person who America and people around the world look to for leadership and calm and sort of control. That is not the kind of M.O. that generally a president wants to give off."

Editor Chris Cillizza noted that Fox hosts had to rush Trump off of the phone.

"The anchors saying, 'All right, Mr. President, OK. Well --' He keeps talking!" Cillizza continued. "And they're like, 'Well, you have a lot of important --' and he keeps talking! That and in itself is -- sorry."

Commentator Nia-Malika Henderson explained that the behavior is a glimpse into what the president is like at night when he is calling friends and venting about the commentary and punditry throughout the day.

"I think that's in a way what we got. Almost Donald Trump just venting over and over and over with all of these grievances for 30 minutes," she continued. "Some people tweeted saying this is what we want from Donald Trump and what we like."

Blitzer said that he was only guessing but he's been in situations where interviews were going on and on and typically he wants for it to continue, because the longer the better. He said that what usually happens in those cases is a handlers typically end up calling in to tell producers to shut it down.