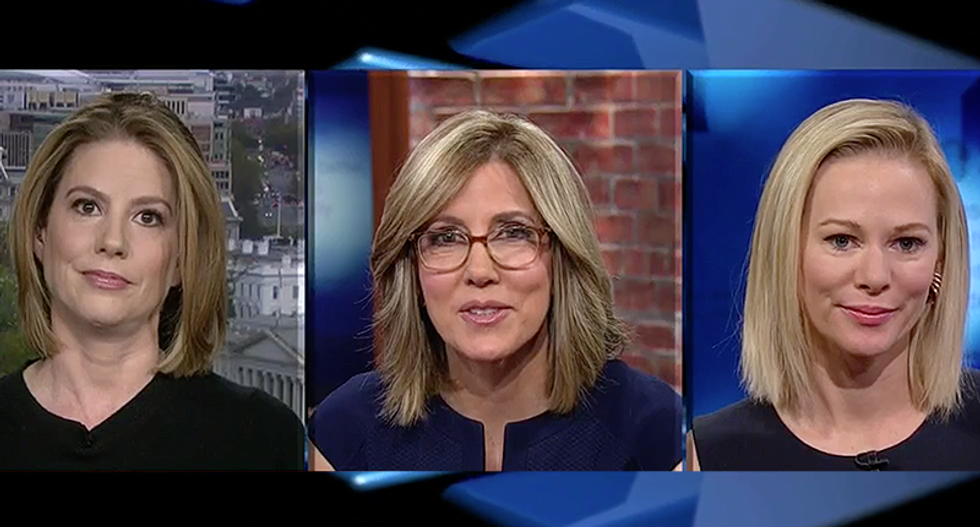 Two political women with partners who have different perspectives than theirs appeared on CNN to discuss the "bizarre" interview between Dana Bash and senior White House counselor Kellyanne Conway.

Over the weekend, Bash asked what was meant to be a light-hearted question about Conway's husband, who has become known for tweeting out anti-Donald Trump tweets. Conway went off in a full-on attack against Bash for asking the question.

“It’s fascinating to me that CNN would go there, but it’s very good for the whole world to have just witnessed that it’s now fair game… how people’s spouses and significant others may differ with them,” Conway said to Bash Sunday. “That should really be fun.”

"I don't know, I feel like the question about Kellyanne's husband struck a nerve," host Alisyn Camerota quipped after playing a clip of the interview. "What happened there!?"

Republican Margaret Hoover said that she can understand why it struck a nerve, because she too has a significant other, who has different political beliefs than she. When people ask her about her husband, she replies simply that they don't share the same beliefs and people should ask him if they have questions.

"She was saying this only happens to me," Camerota said. "Acting as though we would never ask anybody else. I like to play the game: 'What if this were President Obama.' If David Aexelrod's wife, when President Obama was in the White House was tweeting that President Obama's policies were 'absurd and flabbergasting,' wouldn't we have asked David Axelrod about that?"

Hoover said that she wishes the question was poised "does it put you in a difficult position," rather than Bash's question about Conway's husband.

"I think that is what Dana is saying," Camerota noted.

"I feel like the question was, 'What's up with your husband's tweets,'" Hoover said.

Democrat Kirsten Powers noted that it's odd Conway would be playing the victim when 2016 was spent with Trump attacking Hillary Clinton for her husband. Most notably, Trump brought her husband's accusers to their final debate.

"I think your example is a good one of David Axlerod, but it's not even the same thing because Kellyanne Conway's husband is a major player in Republican politics," Powers continued. "So, it's not just some spouse that has some opinions, it's somebody who's very influential. So, it is interesting to people. To me, it looked like Dana was being very lighthearted. It was very lighthearted. The idea that whatever -- I think anybody who's ever met her, I think viewers can tell by watching her, she's literally the nicest person you would meet. She is not nasty or would not try and harass someone and Kellyanne knows that."

"Even if she didn't ask the question perfectly, you know, there's a mature adult way to respond to that, and that's not what Kellyanne did," Powers said.

Camerota noted that Trump has a long history of doing exactly the same thing with his attacks on Andrew McCabe's wife as well as Ted Cruz's wife during the Republican primary.

"So, Kellyanne Conway saying, 'You never go after the spouse,' tell your boss," said Camerota.

Hoover agreed that it shouldn't be on the wife to explain her husband's positions, however, she noted that Conway didn't "fight fair" in her comments to Bash.

"It was a little ugly the way she responded to Dana," Hoover continued. "She was trying three different lines of attack. The better response would be, 'my husband and I have different perspectives at politics and we're going to leave it at that.'"

She and Powers both noted that Conway went a different route by trying to attack CNN, playing the victim of some sort of vicious, sexist attack, when it was nothing more than a fluffy question to close out an interview.

"What's the big deal? I don't understand," Powers wondered. "What's so offensive about this? You know, that she immediately goes to that she's under attack and starts making these weird threats. How bizarre --"

Hoover cut in to say that it was a "counter attack."

"So you think Dana attacked her?" Powers asked Hoover.

"No, I was agreeing with you, Kirsten. I think Kellyanne almost counter-attacked Dana," Hoover said.

"I don't think there was an attack," Powers retorted. "I think it was clearly done in a lighthearted way and she could have said, 'Yeah, we have different opinions, let's move on.' Instead they used it as an opportunities at this to go on a vicious attack sort of saying -- I couldn't really follow but somehow suggesting that she's going to start talking about spouses of people at CNN. It was completely out of control and just -- it just didn't make any sense except for the fact that it touched a nerve and/or she's using it as an opportunity to impress her boss because she can be really nasty to CNN."