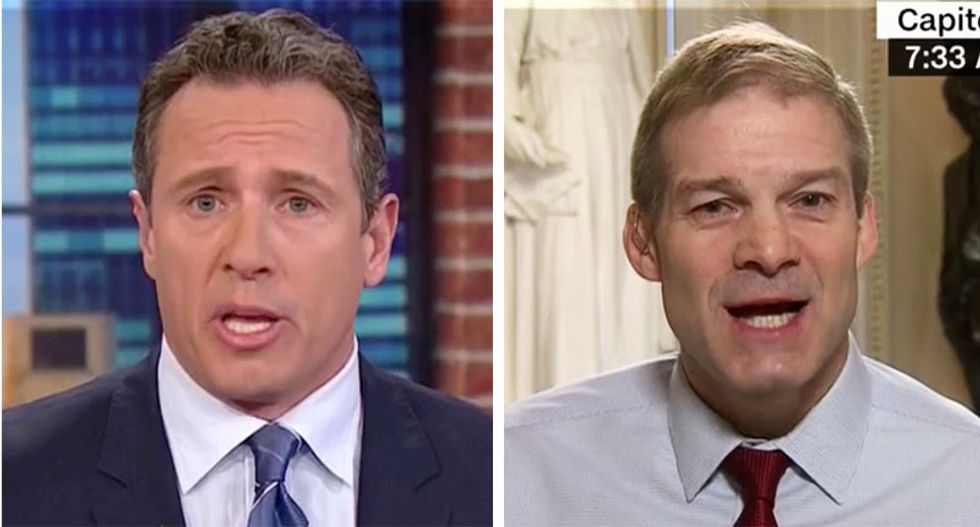 A combative Rep. Jim Jordan (R-OH), on Thursday morning, attempted to undercut that FBI's investigation into the Russian involvement in President Donald Trump's presidential campaign only to have CNN host Chris Cuomo slap down his specious reasoning.

Jordan, who is part of a group of Republicans on the House Intel committee who have been trying to shut down special counsel Robert Mueller's Trump inquiry, used his appearance on CNN's New Day to once again smear the FBI by stating the FISA warrant that was the impetus of the inquiry was granted for bogus reasons.

According to the Republican, the so-called "Steele dossier" that helped lead to the investigation should be dismissed because British spy Christopher Steele has a history of leaking.

Calling the dossier -- which included information about the much discussed "pee tape" that allegedly showed Trump's involvement with Russian prostitutes -- "salacious and unproven," Jordan attempted to make the case for shutting the whole investigation down.

"The author [Steele] of the work product was terminated by the FBI," Jordan asserted. "For what reason? He leaked said information. They tell us you can't get this, Congress, because you're going to leak information for whatever reason. But the very guy who wrote the document they took to the FISA had his relationship terminated."

"Hold on a second," Cuomo protested. "The reporting is that they did reveal the source of the information. I haven't seen the FISA app and neither have you. But they say they did expose that to the judge. It was a number of judges that kept re-certifying this. If Steele was dismissed for leaking, that doesn't mean the information isn't true. And to undermine the FISA process--."

"It colors the source, if you break a cardinal rule," Jordan interrupted.

"I would argue it's irrelevant," Cuomo lectured. "Leaking the information may be bad practice, but decorum I don't even know if he did it, but that is what happened, that is what it is, but you need to have more than that to legitimacy of the FISA court."