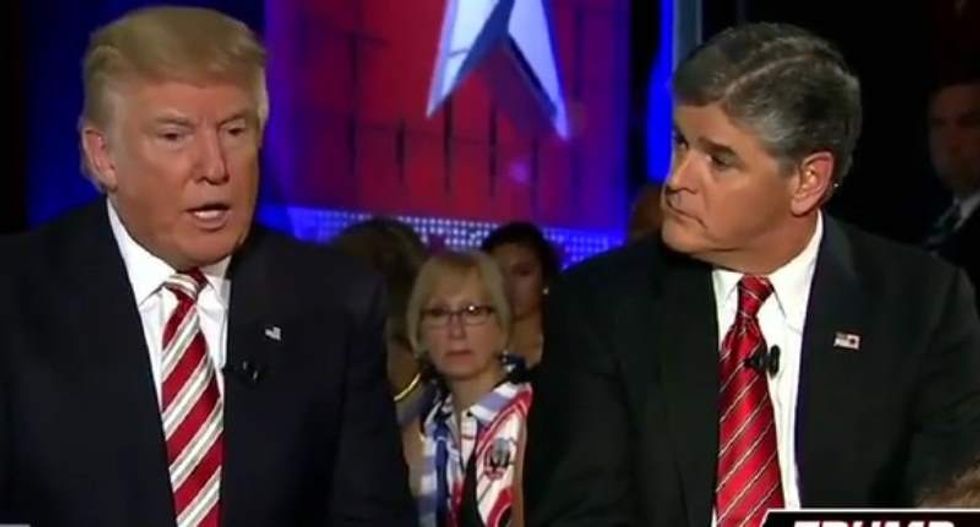 In his Tuesday column for the Daily Beast, conservative commentator Matt Lewis lamented that conservatives have become far too cozy with Fox News.

Lewis is no stranger to attacking Democrats for being too close to the media, but with the new White House occupant's relationship with Sean Hannity, things seemed to have flipped, he said.

Last week it was revealed that Hannity is so close to President Donald Trump "that some White House aides have dubbed him the unofficial chief of staff." He urged Republicans to pay more attention and step up to condemn it.

Hannity has spent years trying to decide whether or not he's a journalist. In some interviews he uses the title but in others he's called himself a commentator or pundit and even "entertainer."

"Whether one cares about upholding ethical standards, this makes it impossible for conservatives to complain the next time a Democrat cozies up to a member of the press," Lewis wrote.

He outlined cases of Democratic presidents being cozy with the media as far back as Franklin Delano Roosevelt and John F. Kennedy.

“Once upon a time Walter Cronkite really was ’the most trusted man in America,” Lord wrote in that piece. “But those days are long gone. And the blame for this total lack of trust lies with the American media itself.”

Cronkite confessed he didn't know how he got away with it. In 2009 ABC News Chief Washington Correspondent George Stephanopoulos was on conference calls with former White House Chief of Staff Rahm Emanuel and former colleagues James Carville and Paul Begala. Lewis quipped that at least he was dealing with the chief of staff. Hannity is going straight to the president to help write tweets.

“The phone calls between President Trump and Sean Hannity come early in the morning or late at night, after the Fox News host goes off the air,” the Washington Post reported.

"Chalk this up as just the latest example of conservatives wanting to 'fight fire with fire' and ape the other side. But it also means surrendering the moral high ground and becoming no better than your adversaries," Lewis said.

He cited John Ziegler, who explained that accepting certain behaviors from a president makes it difficult to stop, even in the face of overwhelming hypocrisy.

Read the full commentary at the Daily Beast.