'Cousin Huckabee' looked like she was going walk out of WHCD as Michelle Wolf roasted her: CNN analysts 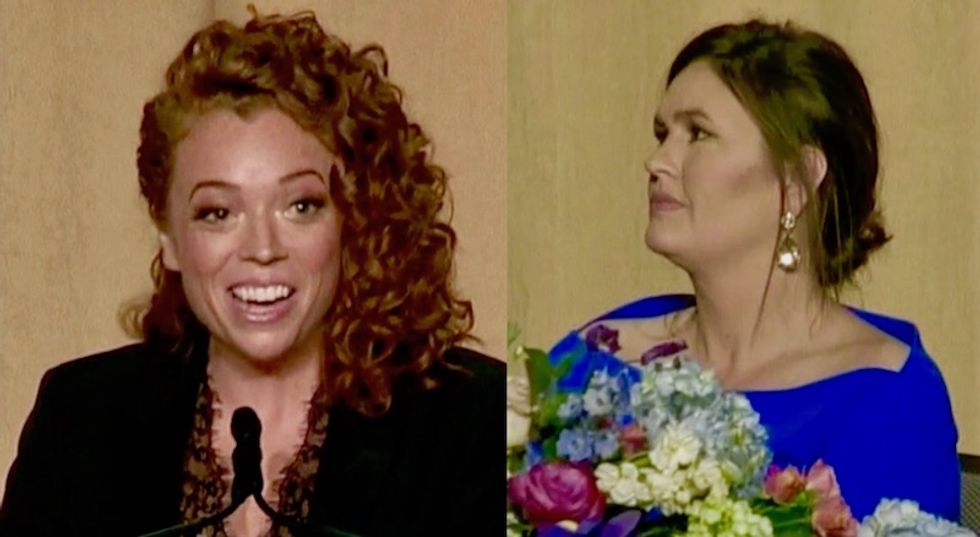 The most talked about moment of the routine was Wolf's brutal roast of White House spokesperson Sarah "Cousin Huckabee" Sanders, who took 90 seconds of dead-on abuse as she sat stone-faced.

The moment was apparently awkward for the White House reporters who go to see Sanders every day.

"It was actually pretty quiet in the room toward the end of Michelle Wolf's appearance," said CNN reporter Kaitlin Collins.

"I could not take my eyes off Sarah Sanders and other members of the White House press office," said CNN reporter Kate Bennett. "Sarah actually physically shifted in her seat a couple times and for a second I thought she might actually get up and leave."

"I wondered the exact same thing," said CNN reporter Laura Jarrett. "I thought for a minute that somebody was going to get up and lead the charge to get out of here. It was uncomfortable. It was cringeworthy, I think, at best."

Watch the analysis below or the discussed bit here.

After the event, an upset "Cousin Huckabee" was spotted in a hallway being consoled by Chris Christie.

A woman who identified herself as Sarah Sanders mom—but who is not verified as such by Twitter— complained about the routine on Twitter.

White House Correspondent Dinner speaker tonight was supposed to be a comedian, but I find nothing funny about murd… https://t.co/xqOcG7nnfJ
— Janet Huckabee (@Janet Huckabee)1524971978.0

Papa Huckabee said on Twitter that he did not watch "the insufferable WHINE House Correspondent's [sic] Dinner." The former Arkansas governor clearly had not watched the event, because he referenced his daughter having to "pretend she was enjoying" it, when she did no such thing.

ICYMI @realDonaldTrump didn't miss it by gosh! He was watching me instead of the insufferable WHINE House Correspo… https://t.co/4nEwGoRw8E
— Gov. Mike Huckabee (@Gov. Mike Huckabee)1524967788.0