Dem senator warns Cohen raid is a 'seismic' event for Trump: ‘Like a nuclear strike with multiple warheads’ 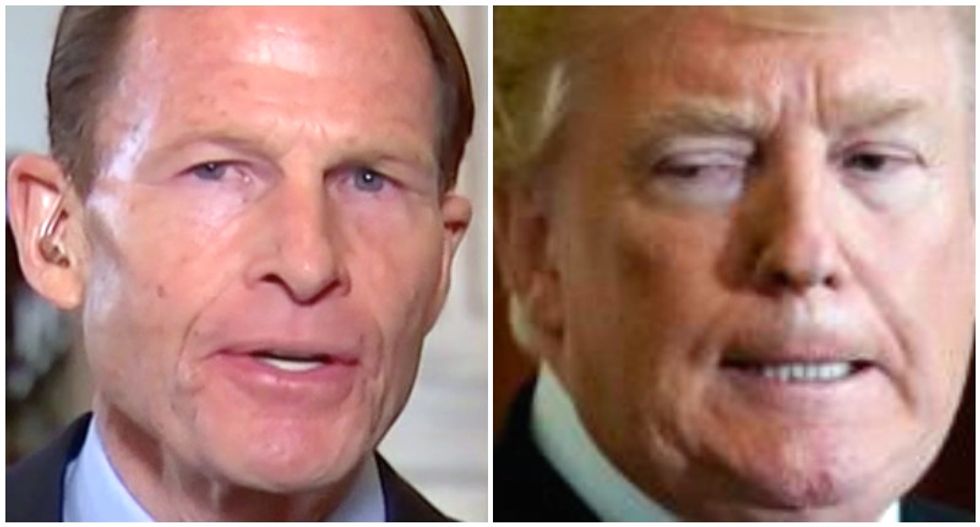 The Connecticut Democrat told MSNBC's "Morning Joe" that the execution of a search warrant at Trump's longtime personal attorney would send shockwaves through the White House -- and rain destruction over the rest of his presidency.

"It's like a nuclear strike with multiple warheads," Blumenthal said.

He said the search was an extraordinarily unusual move, and was approved on multiple levels by Trump appointees.

"A raid on a lawyer's office is an extraordinary event, for a prosecutor, as I was, to contemplate is just a remarkable act of audacity when the lawyer is the sitting president's lawyer," Blumenthal said. "He has the keys to the kingdom, he knows all the secrets about Donald Trump -- and if he were to cooperate it would be indeed a transformative event, so the raid is seismic."

He said the warrant required a higher standard than probable cause to be granted by a court.

"The FBI and the U.S. Attorney has to convince the Department of Justice that they are going to come away with significant evidence of a crime," Blumenthal said.

Blumenthal explained that Cohen could hold evidence of a variety of potential crimes related to special counsel Robert Mueller's investigation of Trump campaign ties to Russia.

"I think Cohen has been involved in Trump's relationship to Russia, his negotiations for the hotel that he wanted to build there, the dealings with Ukrainians have been within Cohen's purview, but my hunch is that it relates much more to obstruction of justice, perhaps wire fraud or bank fraud or money laundering," he said. "All of those potential crimes involve Donald Trump."