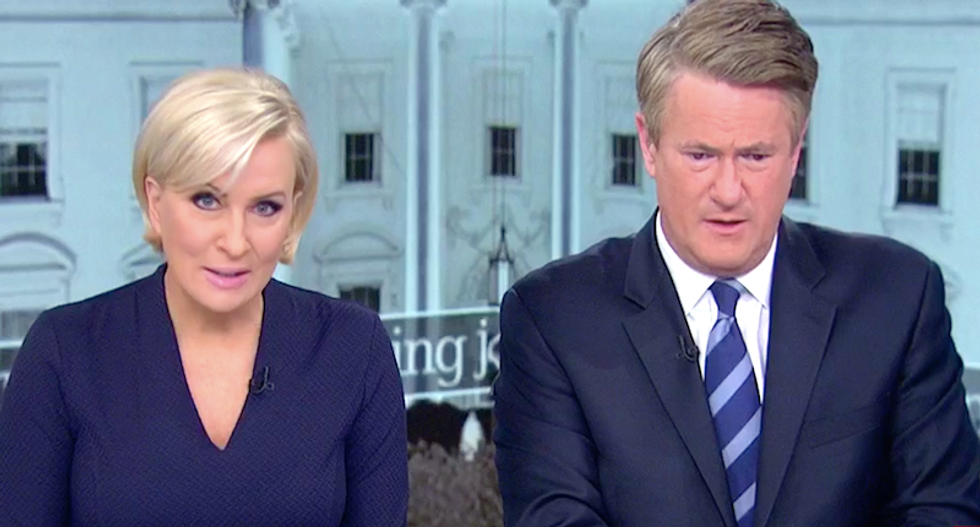 MSNBC's Joe Scarborough and Mika Brzezinski were disgusted by the pro-Trump propaganda that Sinclair Broadcast Group forced its anchors to read on the air.

The "Morning Joe" hosts played a video montage showing anchors warning viewers about a "deep state" conspiracy they claimed was out to destroy President Donald Trump, and one after another told viewers this was "extremely dangerous to our democracy."

Scarborough and Brzezinski agreed this was indeed "extremely dangerous to our democracy," and bashed the right-wing broadcast company for "shoving propaganda down local anchor's throats."

"The president has no problem calling the media enemies of the state, has no problem constantly lying about them," Scarborough said. "He has no problem being angry when they call him out on his own lies. What's so interesting is, as those news anchors from around the country were saying that this weekend, you know, and they were instructed to recite words that legitimize the president's agenda, it was Donald Trump who was lying."

Scarborough cited several tweets from the president from over the weekend that misrepresented facts to bash his political enemies, and said the Sinclair anchors helped distort reality to suit Trump's agenda.

"He lied about Amazon and post office rates, he lied about the Washington Post who happened to publish his story about Donald Trump's finances, and all of that just days after websites, including InfoWars and others, accused Parkland survivor David Hogg of not being at the Parkland massacre," Scarborough said.

"That was picked up by mainstream media, by the way, hostile to the Parkland students," he added. "The president's allies also picked up the fact -- false attacks that chairwoman of the Republican National Committee, for instance, one of the more depressing things, believe it or not, in a depressing political weekend, she tweeted Democrats of hating our president more than they love our country."

"It's kind of beyond chilling, right?" Meacham said. "It's state media, essentially. It's one of the things that we've always, as a country, prided ourselves on a free press. People can accuse us of thinking alike sometimes. They don't do that anymore, but back at mid-century -- but at least that was a free choice. This is something that's sort of fascinating."

"I guess only Donald Trump can do this, could unify fears of corporate media plus First Amendment people plus true conservatives who should be worried about large institutions dictating the reality for others," Meacham added. So anyone worried about any of those issues should be, as you say, chilled by this."