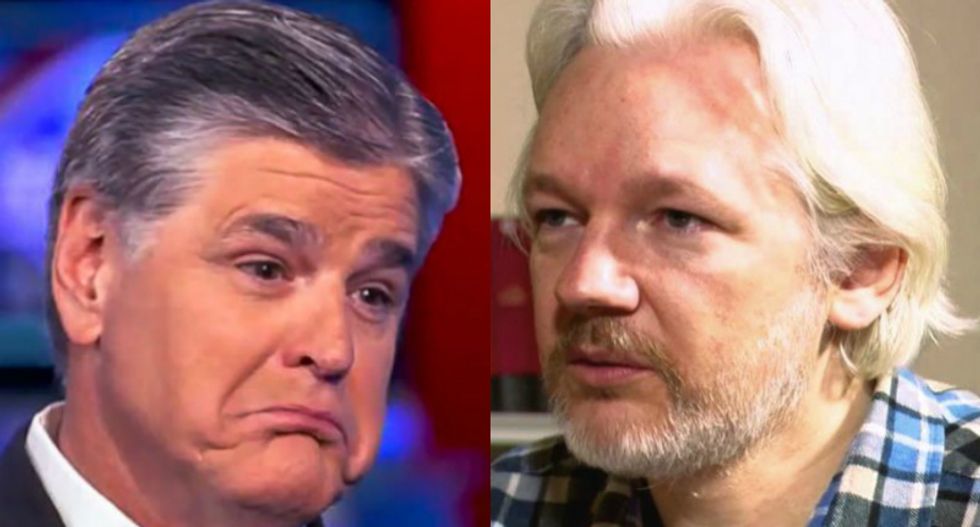 Sean Hannity finds himself in a professionally problematic situation after he was outed in federal court as the mystery third client of President Donald Trump's personal attorney Michael Cohen -- but he could potentially be in deeper trouble.

The Fox News broadcaster neglected to inform viewers of his personal ties to Cohen despite repeatedly discussing the attorney and the FBI raid on his home and office, which likely includes evidence related to Hannity's discussions with him.

It's not clear what evidence relating to Hannity could have been turned up by the search warrant, or whether those documents or recordings would be of any interest to investigators.

But former National Security analyst John Schindler and others have been warning for months that Hannity has helped the president spread Russian propaganda through his nightly Fox News broadcasts and daily syndicated radio program.

Schindler claims the Fox News broadcaster has been under counterintelligence investigation for his links to the Kremlin, which appear to run through WikiLeaks founder Julian Assange.

"We need to ask questions about Hannity’s relationship with the Kremlin, considering his track record of pushing rancid Russian disinformation on his Fox News program," Schindler said. "Hannity is a propagandist, not a journalist, by his own admission, but if he has served as a witting conduit for lies crafted by Russian spies, Fox News needs to explain why they are airing Kremlin Active Measures aimed at the American public and calling it 'news.'"

"Intelligence Community friends have told me that Sean Hannity has been under counterintelligence investigation for some time, based on his clandestine ties to Moscow," he added. "Now we know why."

Hannity played a key role in promoting a conspiracy theory about slain Democratic National Committee staffer Seth Rich, whose family has sued Fox News over a since-retracted May 2017 article posted on the network's website.

Schindler says the conspiracy theory originated just days after Rich's murder on the shadowy conspiracy website Sorcha Faal -- which claimed the 27-year-old was assassinated by a "hit team" linked to Hillary Clinton.

The website claimed its source was Russia’s Foreign Intelligence Service, or SVR, and Schindler noted this "classic Kremlin disinformation" campaign was quickly picked up by Trump allies such as Hannity, Assange and Republican activist Roger Stone.

The Rich family's lawsuit claims Trump himself reviewed drafts of the Fox News story last year before it was broadcast and published online.

WikiLeaks, which dumped the stolen emails online during the 2016 campaign, offered a $20,000 reward for information leading to the conviction of Rich's killer -- and Assange reportedly has been in contact with Hannity, Stone and Donald Trump Jr.

Stone appeared on the InfoWars radio show -- where host Alex Jones also promoted the Rich conspiracy -- the same day he sent an email claiming to have dined with Assange, and predicted "devastating" disclosures against the Clinton Foundation.

No evidence has turned up yet that Hannity and Assange were in contact during the campaign, but the WikiLeaks founder reached out to a parody Twitter account for the Fox News broadcaster that suggests the two men may have been in contact before -- and Hannity has invited Assange to host his radio program.

Assange contacted the account, apparently believing it was the broadcaster, and offered to set up a meeting over "other channels" to send "some news about Warner."

About a week later, Fox News broke into its evening programming to report on text messages between Sen. Mark Warner (D-VA), the top Democrat on the Senate's Russia investigation, and a lobbyist linked to a Russian oligarch.

The texts had been reviewed months earlier by Republicans, who saw nothing suspicious about them, and Ed Henry, the Fox News reporter who broke the story, insisted WikiLeaks and Hannity played no role in his reporting.

Hannity hyped the report on his radio program, hours before Henry's report came out, and Trump tweeted an attack on Warner's credibility hours after it aired.

"Wow! -Senator Mark Warner got caught having extensive contact with a lobbyist for a Russian oligarch. Warner did not want a 'paper trail' on a 'private' meeting (in London) he requested with Steele of fraudulent Dossier fame. All tied into Crooked Hillary,” he tweeted.