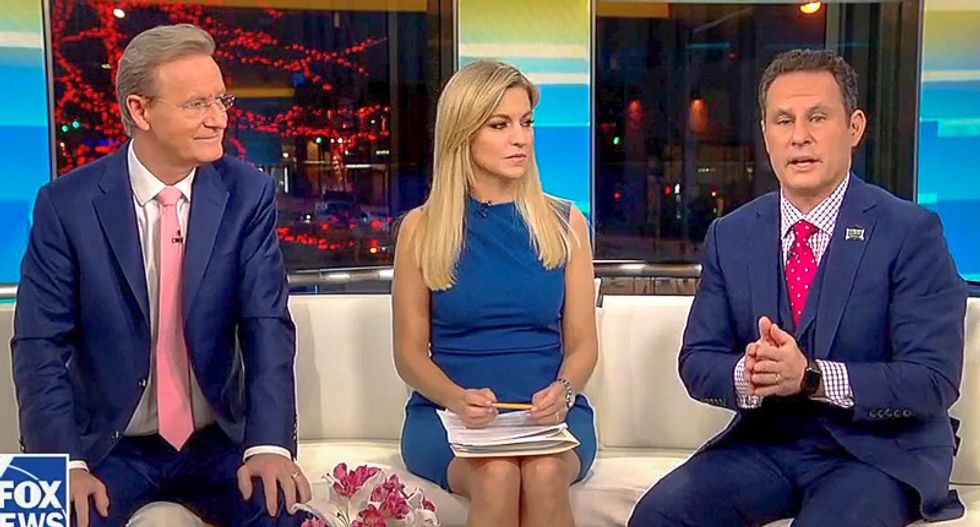 While all of the cable news show hosts were obsessed on Friday morning with reading excerpts from fired FBI Director James Comey's book, one of the co-hosts of President Donald Trump's favorite Fox News morning show made a not-too-subtle suggestion to the president on how to make talk of Comey's revelations go away.

Speaking with Fox News personality Geraldo Rivera, Fox and Friends' host Ainsley Earhardt proposed a military intervention in Syria could become the talk of the day should the president choose to act immediately.

Sitting between co-hosts Steve Doocy and Brian Kilmeade, Earhardt made her suggestion.

"If the president, and France, and the UK decide to strike Syria, don't you think that story would be a bigger story than Comey's book that's going to be released on Tuesday?" Earhardt asked.

Speaking remotely, Rivera, paused due to transmission problem before taking the bait.

"I think that the United States, the United Kingdom, and France certainly have the military wherewithal," Rivera replied. "Indeed, the United States could do it on its own, strike Syria, strike [President Bashar] Assad's resources, military assets, in retaliation for the gas attack, the horrifying gas attack that the president was so righteously revolted by. I mean, we all were."

Fox & Friends host Ainsley Earhardt is just asking if bombing Syria "would be a bigger story that Comey's book that is released on Tuesday." pic.twitter.com/YKCMoWtTUZ