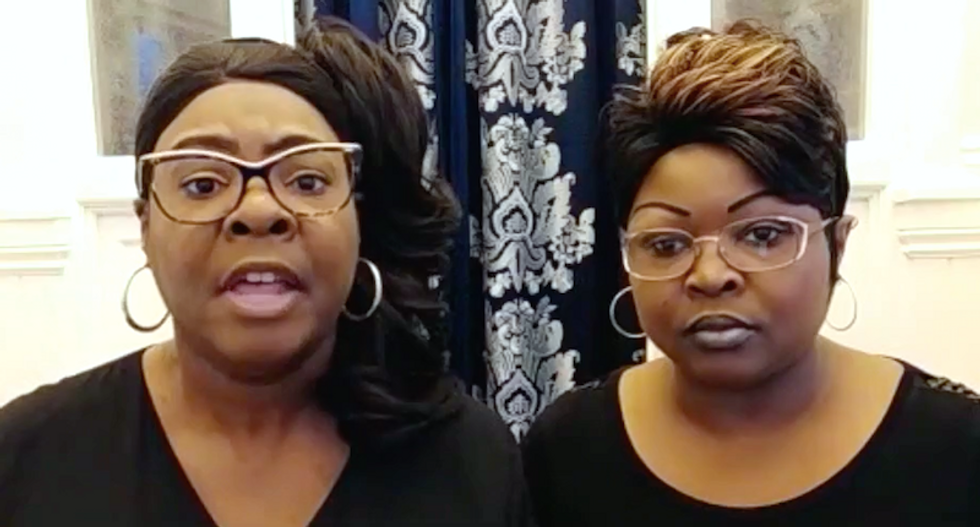 "Fox & Friends" invited "Diamond and Silk" on to clean up their congressional testimony, in which they evidently perjured themselves about payments from the Trump campaign.

Lynnette "Diamond" Hardaway and Rochelle "Silk" Richardson testified Thursday before the House Judiciary Committee, where they complained that Facebook had punished them for political reasons, and denied an FEC filing that showed a $1,274.94 payment campaign payment for "field consulting" work.

"After that exchange, some claim they lied under oath and that was the headline in a number of papers," said Fox News host Steve Doocy.

Co-host Brian Kilmeade praised the women as "superstars" and said they had done well on Capitol Hill, where they dismissed the government filing as "fake news," and gave them a chance to explain the payment.

"We have never been paid by the Trump campaign," she said. "That was for reimbursement."

Kilmeade asked where lawmakers came up with the figure cited during the hearing, but his colleague threw the social media activists a lifeline.

"What happened was, you were reimbursed for flights, right, from your house to Ohio," Doocy said, as the women nodded. "It was all on the up and up, and they referred to it in the accounting as 'field consulting' but really it was just to get you to an event, right?"

"Absolutely," she said. "It was just to get us to an event, and on top of all of that, the Trump campaign, they put out a statement on yesterday."

"We hope that all of these salacious, gossip news sites and news organizations like the very fake news retract all of their lies," Hardaway added, as Richardson interjected with affirmative comments.

The women agreed the hearing did not go as they had hoped, and they accused Democratic lawmakers of taking part in a conspiracy to silence their views on social media.

"Let me you something," Hardaway said. "What I was appalled and what we were offended by was you have these representatives sitting there as if we had no merit and no claim, and they were being very dismissive. My thing is, I thought they worked for the American people. Why are you questioning me about a FEC report? How much money did Mark Zuckerberg allegedly pay you all?"

"That's what we should have been asking," Hardaway added, as Richardson murmured encouraging remarks. "Why are you questioning us about that and not questioning us about how we were censored? I felt offended as an American, born on this soil, that first black people -- that don't want us to obtain the American dream and, second, they dismissed our claim, yes, a DACA person can go up there that's not even born on this soil and they listen all day. So I don't understand that. But, listen, we're not going to be silenced."

"No, we're not," Richardson agreed.

The women continued ranting about the "Democratic plantation" and insisting they deserved an opportunity to make money "legally," and the Fox News hosts steered them back on topic by playing a clip of Rep. Sheila Jackson Lee (D-TX) questioning them on the payment.

"She was looking at something that said field consulting that figured you were consultants," Doocy offered. "That's not the case. It was, as you said a moment ago, it was travel expenses."

Hardaway agreed, and lashed out again at Democratic lawmakers, and Richardson chimed in with her own denial.

"And another thing, we never profited off of that particular reimbursement, that was strictly for flight tickets only," Richardson said. "That's it."