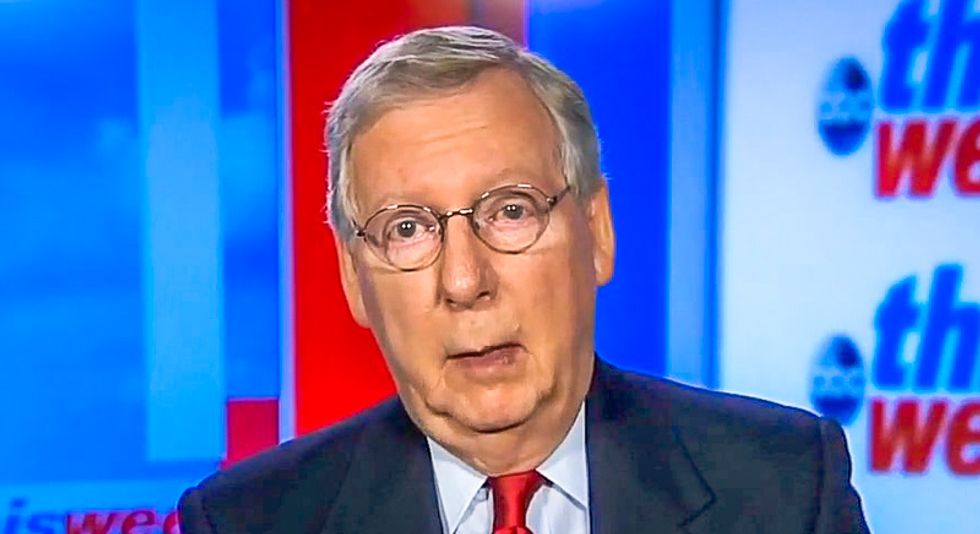 Sometimes, you just have to pause for a moment to appreciate Republicans’ utter shamelessness. Senate Majority Leader Mitch McConnell (R-A Pond in Kentucky), accused Democrats of “historic obstruction” this week, and Sen. Bob Corker (R-Can’t Escape Quickly Enough), had a big sad over the fact that that they’ve turned their obstruction machine against the oh so very well qualified Mike Pompeo, Trump’s pick to replace the Secretary of State that he had fired while the poor bastard was sitting on the pot.

Mike Pompeo is a highly qualified nominee. We used to have a tradition here in the Senate of overwhelmingly confirm… https://t.co/7tH6NHapWh
— Senator Bob Corker (@Senator Bob Corker)1524172194.0

There are 47 Muslim-majority countries in this world, many of them key allies in unstable parts of the world, and Pompeo, an infamous Islamophobe – as well as an anti-gay climate change denier and all-around crackpot – is by definition unqualified to deal with them with respect.

Pompeo has also had no trouble with the media and his colleagues falsely claiming that he was a war veteran for the past couple of decades. That includes 51 Republicans who mentioned his nonexistent combat history in a letter urging their colleagues to confirm him. If he were a Democrat, his nomination would have been withdrawn a nanosecond after this lie was exposed. “Stolen valor” and all that.

But that’s really the least of it. It’s the sheer chutzpah of accusing Democrats of engaging in “historic obstruction,” when Republicans blocked more of Obama’s nominees (86) in his first term alone than Congress had rejected under all 43 of the country’s previous presidents combined (82). And then blatantly stole a Supreme Court seat that would have given the high court its first liberal/moderate majority since 1971.

And then, having blocked an unprecedented number of Obama’s judicial nominees, McConnell is now scrambling to pack the courts with Trumpers. “Mitch McConnell is making a last dash to stock the judiciary with conservatives this year as a hedge against the chance that Republicans lose the Senate in November,” Politico reported this week. Their capacity for hypocrisy is really kind of impressive when you think about it.

Even more aggravating is the fact that Obama tended to choose well-qualified moderates, but Trump has a well-established established penchant for doing the opposite of whatever his predecessor did.

We got a sense of how qualified Trump’s judicial nominees tend to be this week, when Judge James Ho offered his first judicial opinion for vitally important Fifth District Court of Appeals – actually the first in his life. Ian Millhiser wrote this week at Think Progress that newly minted judges usually “don’t use their very first opinion to burn down the distinction between law and political myth-making.” But Trump, as we know, hires only the biggest goofballs best people, so Ho stepped “away from legal argument entirely to launch into a political rant against big government — complete with a gratuitous swipe at Obamacare.”

Sixteen Dems voted to confirm Interior Secretary Ryan Zinke. Julie Turkewitz reported for The New York Times this week that Zinke “has torn up Obama-era rules related to oil, gas and mineral extraction and overseen the largest reduction of federal land protection in the nation’s history.” He’s selling off the public trust everywhere but… his home state of Montana. In Montana, “Mr. Zinke has struck a different note.”

In the past year, Mr. Zinke has halted the sale of oil and gas leases near Yellowstone National Park, opposed gold mining in that area, and urged the president to protect one national monument, Montana’s Upper Missouri River Breaks, while creating another, the Badger-Two Medicine, just miles from his childhood home.

Four Dems voted to confirm Ajit Pai, Trump’s pick to head the FCC. Pai, as you know, immediately moved to kill net neutrality, and now we get this fresh Hell…

A broadband adviser selected by Federal Communications Commission Chairman Ajit Pai to run a federal advisory committee was arrested last week on claims she tricked investors into pouring money into a multimillion-dollar investment fraud scheme, according to The Wall Street Journal.

Cheetolini’s Trade Representative, Robert Lighthizer flew through the confirmation process on an 82-14 vote with plenty of support from the Democratic Party of Unprecedented Obstruction. And if this headline from The New York Post doesn’t sum up the Trump era perfectly, I don’t know what would: “Trump’s trade rep spends $1M on new furniture, blames Obama.”

Let’s turn now to a few items that illustrate how the GOP is conducting “the people’s business.”

On Wednesday, Sen Joe Manchin (D-WV) and every Republican present in the Senate voted “to eliminate a 2013 consumer protection measure intended to combat discrimination in auto lending,” according to Politico’s Zachary Warmbrodt.

It gets worse. In a separate article, Warmbrodt explained that this move was just the first in “a new front in [the GOP’s] push to roll back regulations across the government, using a maneuver that could enable them to strike down decisions by federal agencies that reach back decades.”

The Congressional Review Act empowers Congress to kill new regulations, but “while Republicans in the Trump era have already taken advantage of the 1996 law to remove more than a dozen recently issued rules, this would be the first time that Congress will have used it to kill a regulatory policy that is several years old.”

This, too, is part of their mad dash to break as much as they can while they still control all three branches of government.

Relatedly, Alexia Fernández Campbell reported for Vox that the Consumer Financial Protection Bureau, Elizabeth Warren’s signature achievement until it was taken over by the regime in a sort of palace coup, “is taking it easy on payday lenders accused of preying on low-income workers.”

We knew this generally, but here are the deets:

In the agency’s first report to Congress since Mick Mulvaney took the helm in November, the CFPB said it is dropping sanctions against NDG Financial Corp, a group of 21 businesses that the agency, under President Obama, had accused of running “a cross-border online payday lending scheme” in Canada and the United States.

“The scheme primarily involved making loans to U.S. consumers in violation of state usury laws and then using unfair, deceptive, and abusive practices to collect on the loans and profit from the revenues,” the CFPB lawyers argued in the complaint filed in the Southern District of New York in 2015.

The Supreme Court is set to hear a seemingly minor case later this month on the status of administrative judges at the Securities and Exchange Commission, an issue that normally might only draw the interest of those accused of stock fraud. But the dispute turns on the president's power to hire and fire officials throughout the government. And it comes just as the White House is saying President Trump believes he has the power to fire special counsel Robert S. Mueller III.

Jared Kushner failed to solve the Middle East conflict, but at least...

Meanwhile, from the Draining the Swamp file, Anita Kumar reported for McClatchy that “Donald Trump’s U.S. businesses have received at least $15.1 million in revenue from political groups and federal agencies since 2015,” much of it from his campaign. "The money went to Trump’s airplanes, hotels, golf courses, even a bottled water company during the presidential campaign and the first 15 months of his presidency, according to a compilation of known records of the spending by Public Citizen obtained by McClatchy."

Finally, we’d like to say that we’re better than this – that this horror doesn’t reflect our values. We'd love to say that, but history would slap us upside the head if we did.

According to The New York Times, “members of Congress have been demanding answers about how many [undocumented] families are being separated as they are processed at stations along the southwest border, in part because the Trump administration has in the past said it was considering taking children from their parents as a way to deter migrants from coming here.”

Officials have repeatedly declined to provide data on how many families have been separated, but suggested that the number was relatively low.

But new data reviewed by The New York Times shows that more than 700 children have been taken from adults claiming to be their parents since October, including more than 100 children under the age of 4.

Sorry to leave you on such a depressing note.