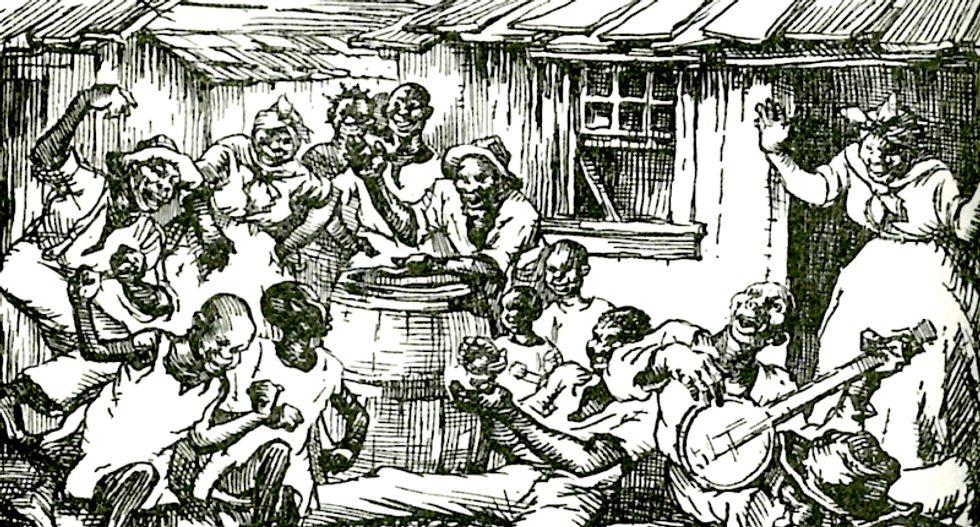 Drawing by Hanson Booth in "The Development of America," by Fremont P. Wirth (American Book Company, 1937)

Americans were steeped in "textbook racism" and white supremacy through history books used in schools for generations, according to a new analysis.

Donald Yacovone, an associate at the Hutchins Center for African and African American Research at Harvard University, examined nearly 3,000 U.S. history textbooks in the university's collection and shared his findings in The Chronicle of Higher Education.

"After reviewing my first 50 or so textbooks, one morning I realized precisely what I was seeing, what instruction, and what priorities were leaping from the pages into the brains of the students compelled to read them: white supremacy," Yacovone wrote. "One text even began with the capitalized title: 'The White Man’s History.'"

The books, which were used in schools between about 1800 until the 1980s, presented black Americans exclusively as "ignorant negroes," slaves or "anonymous abstractions that only posed 'problems' for ... white people of European descent."

"The assumptions of white priority, white domination, and white importance underlie every chapter and every theme of the thousands of textbooks that blanketed the country," Yacovone wrote. "This is the vast tectonic plate that underlies American culture. And while the worst features of our textbook legacy may have ended, the themes, facts, and attitudes of supremacist ideologies are deeply embedded in what we teach and how we teach it."

"Until 1860, no American history textbook ever mentioned the name of an abolitionist or even the existence of an antislavery movement," he wrote. "If slavery was mentioned at all, the discussion focused on Congress and on political leaders like Henry Clay. History took place in European exploration, colonization, revolution, Constitution-forming, party politics, and presidential administrations — and nowhere else."

Later textbooks folded in chapters on abolition, the Civil War and Reconstruction, and Yacovone found those histories portrayed gleeful slaves enjoying a "rollicking time" after a day's work and blamed abolitionists and the North for the war.

"Indeed, descriptions of the Reconstruction era in history textbooks published from about 1900 to the mid-1960s provide a stunning immersion in white arrogance, black incapacity, and nostalgia for the sweet days of slavery and Southern white racial domination," Yacovone wrote.

Textbooks published between the 1930s and early 1950s excused Ku Klux Klan terrorism and instructed students that slaves "found that freedom could be a greater curse than slavery" -- and Yacovone recoiled after re-examining the textbook he'd used as a fifth-grader.

"Its painfully simplistic story never mentioned any abolitionists or even an antislavery movement," he wrote. "Slaves, on the other hand, proved necessary to pick cotton — 'Who else would do the work?' the authors asked ... In the end, the book took a reconciliationist approach to slavery and the Civil War, asserting that everyone was brave, everyone fought for principle, and Robert E. Lee represented all that is noble and heroic in American society."

"While I never forgot the book, its lessons, fortunately, made few lasting impressions upon me," Yacovone added. "Given the national outburst of race hate that has erupted, however, I have to wonder exactly what we are now teaching our children."