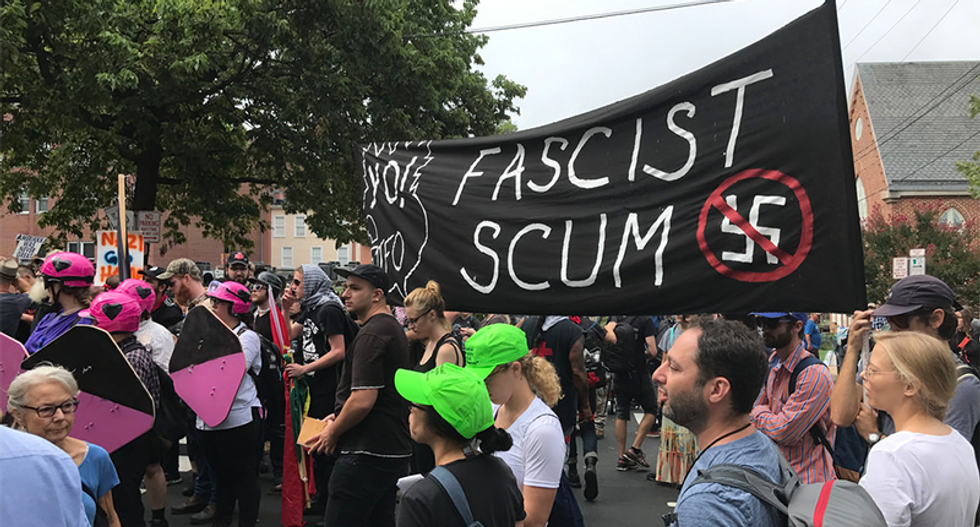 Counterprotesters at white supremacist rallies are now being considered "anarchist extremists," whether they are or not.

A Daily Beast report revealed the Department of Homeland warned local law enforcement that there might be clashes between white supremacists and antifascists (called "antifa"). The September 2016 report was then used by the Trump Justice Department to prosecute hundreds of people who protested at President Donald Trump's inauguration.

They listed out ways in which law enforcement could target such "anarchist extremists" known for counterprotests, but the way in which they describe what an "anarchist extremist" is causing heads to turn. Some anarchists participate in the antifascist movement but so do some liberals, who support the existence of government.

DHS's report cites “symbols often associated with anti-racist anarchist extremists” includes the letter “A” in a circle, but they also included other images associated with left-leaning movements. Three downward arrows in a circle, for example, originated in the 1930s in Germany to oppose the Nazi party. Another symbol is a crossed-out swastika and the "Good Night White Pride" symbol, which depicts a silhouette of a man kicking a Nazi.

They included a list of possible planned violence that law enforcement can use to "justify increased suspicion." They could then use such suspicion to conduct warrantless pat-downs or inspection and seizure of property. The list includes things like carrying knives but also simply wearing dark clothing or bandanas. They cited anyone scouting a march route could be such an extremist as well as anyone carpooling to demonstrations.

ACLU Brennan fellow Vera Eidelman told the Daily Beast that such descriptions are “troubling and consistent with what we’ve seen of the FBI targeting and surveilling environmentalists, civil rights activists, and lumping them together based on a few incidents."

She noted there is a tendency to sweep up huge groups of people even if they don't share the ideology.

“The carpooling example is particularly interesting because all people are doing is pooling resources. You could argue that going with friends is part of the appeal,” Eidelman said, adding that the scrutiny might chill political activism by large groups.