Internet drags 'black hole of charisma' Ted Cruz for whining about Facebook bias: 'Why won't you accept my friend request?’ 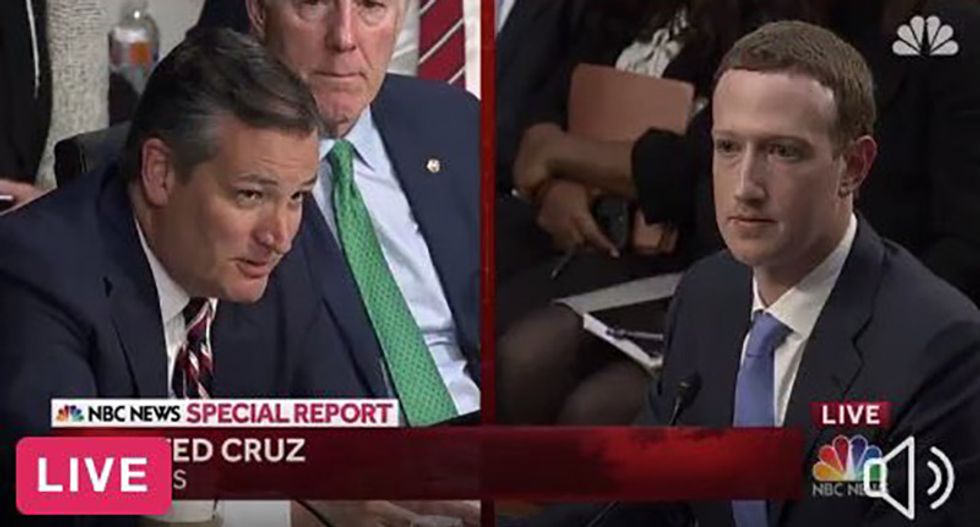 During a congressional hearing before the joint Senate Judiciary and Commerce Committees on Tuesday, Sen. Ted Cruz (R-TX) veered off-course from Facebook’s role in helping spread Russian propaganda during the 2016 presidential election, as well as privacy concerns over its data collection practices, and instead focused on what he complained was the company’s liberal bias.

The hearing with Facebook CEO and co-founder Mark Zuckerberg was convened to discuss “Facebook, Social Media Privacy, and the Use and Abuse of Data” and purportedly intended to hone in on how the company collects and protect users’ data.

Instead of focusing on the national security implications of Facebook’s Role in spreading Russian propaganda, Cruz took Zuckeberg to task for, among other things, no sufficiently promoting Chick-Fil-A Appreciation Day on the platform.

Naturally, the Internet piled on Cruz. Read some of the best responses below:

It seemed like Ted Cruz was in a different hearing than Zuckerberg and everyone else. One where the fate of Chick-F… https://t.co/8qN3cbCs17
— Aimee Picchi (@Aimee Picchi) 1523392052.0

Reminder: all the Cambridge Analytica Data was misappropriated for the Ted Cruz campaign. He’s on the Judiciary Com… https://t.co/2oosH9nmzG
— nxthompson (@nxthompson) 1523358046.0

Ted Cruz’s line of questioning was the first time I started to side with Zuck this whole hearing.
— Rachel King (@Rachel King) 1523391977.0

"HOW MANY PURE REPUBLICAN HANDS WERE INVOLVED IN THE CONSTRUCTION OF THIS 5 DOLLAR FOOTLONG?!?!"- Ted Cruz ordering a sandwich at Subway
— The Levine Machine (@The Levine Machine) 1523391889.0

ted cruz is such an unfathomable black hole of charisma he can make anyone seem relatively likable
— jake (@jake) 1523391772.0