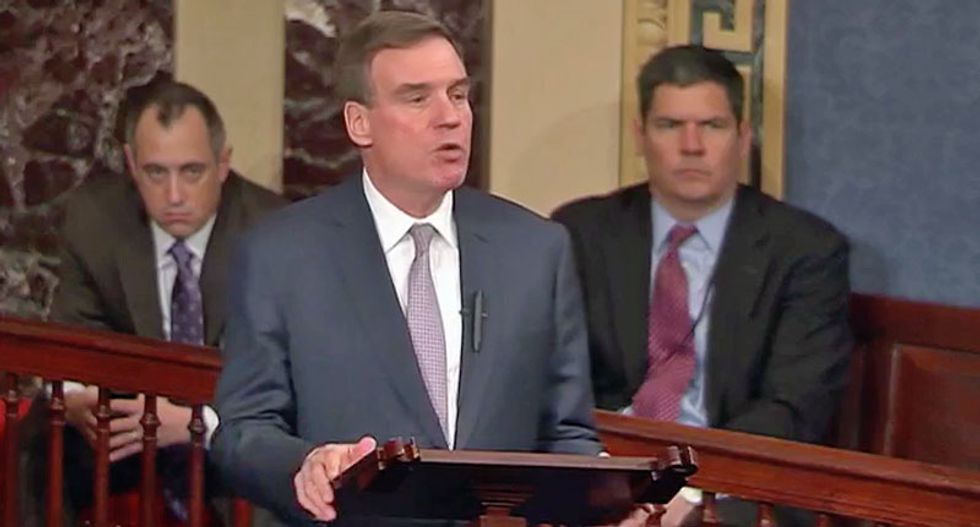 The vice chair of the Senate Intelligence Committee warned of a "Constitutional crisis" arising from the White House in response to the investigation by special counsel Robert Mueller.

Senator Mark Warner (D-VA) was interviewed on MSNBC's The Beat with Ari Melber on Wednesday.

"We're still receiving literally thousands of documents even though the Trump transition is trying to claim a certain exotic privilege, that I don't think exists in law," Sen. Warner said of his committee's investigation.

"Was Mr. Cohen forthright in his dealings with the Congress?" Melber asked.

"I'm not going to comment on that," Sen. Warner replied.

The senior senator from Virginia did say that "it appears that the president's use of his Twitter account has gotten even more extraordinary and more unusual."

"You mentioned the Senate probe. On the House side, there are Republicans who are threatening to put pressure, contempt or even impeachment against Rod Rosenstein, who oversees the probe," Melber noted. "Is there any grounds for that?"

"Ari, I believe what I've heard from the House, they were not only going to potentially sanction a long-time professional Republican appointee, Mr. Rosenstein," Warner replied, "but also sanction or impose penalties on Mr. Trump's own FBI director, Republican Christopher Wray."

"And what I think this is is an effort to try to divert attention and what I find so troubling is that you've got White House and White House allies trying to basically impugn the integrity of virtually everybody who works at the FBI and everybody who works at the Department of Justice," Warner continued. "That's not the way our country operates."

The top Democrat on the Intelligence Committee painted a dark picture of where this could go.

"You have that ability to undermine people's confidence in our institutions of justice, the next thing is people start choosing which laws they want to follow, and which ones they choose not to follow," Sen. Warner predicted. "Which may be the lead-up to potentially executive action where I think the president would take us into a constitutional crisis if he starts going about firing people like Mueller or Rod Rosenstein."