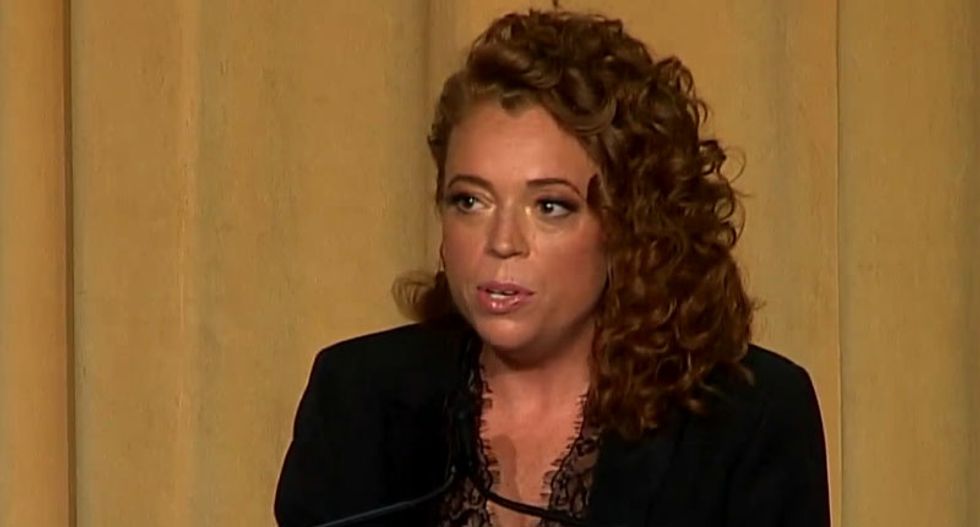 The annual "nerd prom," otherwise known as the White House Correspondents' Dinner (WHCD), was Saturday night. If we are lucky, it will be the last one. The entire event is inappropriate, and it has nothing to do with comedians being rude to the people in the audience or on the dais. After all, they are hired to do that. The whole tired ritual is based on the old tradition of the comedy "roast," where people get up and insult the guest of honor, which in the case of the correspondents' dinner, is the president and the D.C. establishment, including the press.

No, the event is inappropriate because it's an obnoxious suck-up to power, no matter who the president is or how edgy the comedian. The press and the politicians lining up on red carpets with Hollywood celebrities and yukking it up together, as if politics and government were just one big performance and this was their awards show, has always been an excellent illustration of everything that's wrong with our civic life. But in the age of Trump it's become downright decadent and disturbing.

This year's dinner seems to have hit quite a nerve. Comedian Michelle Wolf's comedy stylings were not appreciated by the press corps or the administration. She called the president and the White House staff liars, which is true, and pointed out that the media benefits from this surreal circus, which is also true. This bound both together in a way that clearly made everyone extremely uncomfortable, as it was meant to.

So now we have much clutching of pearls and rending of garments among members of the press, demanding apologies from Wolf for allegedly insulting Sarah Huckabee Sanders' looks (which Wolf did not do) and for comparing her to Aunt Lydia in "The Handmaid's Tale," which is as spot-on as you can get. (As New Yorker TV critic Emily Nussbaum pointed out on Twitter, "her job is *exactly* like Aunt Lydia: she is the frowning female enforcer for a fascist patriarchal society, punishing those who resist her lies.")

Anyway, Sanders has no right to be upset by any rude insults when she serves as an apologist for this man:

Wolf's jokes were sharp, to be sure, but they were nothing like that. I'm sure no one needs to be reminded of the president's daily assaults on the press and his political rivals, or anyone else who angers him. So the Trump administration calling for smelling salts over this routine is the biggest laugh line of the night.

Here's a typical example of the Beltway handwringing on Sunday morning.

This is also part of the tiresome ritual, which seems to work itself into a full blown hissy-fit every few years. Mitchell is referring to the Radio and Television Correspondents' Dinner in 1996 where the comedian for the night was radio personality Don Imus, who rudely referenced the president's infidelities in front of Hillary Clinton and said that the Clinton administration's diverse cabinet looked like "the scene out of Star Wars." Hillary glared and Bill covered his face and everyone was very upset. The correspondents' association even sent the president and first lady an apology.

But here's the thing. Clinton regularly appeared with Imus during his campaigns, and the longtime shock jock was even credited with putting Clinton on the map back in 1992. Imus' show featured a regular parody song about Hillary Clinton with lyrics about how she "fornicates," "menstruates" and "urinates," with the refrain: "That's why the First Lady is a tramp." He called the president a "fat pantload" and a "lying weasel." It didn't stop Bill from calling in and kibitzing with the guy.

Don Imus was a reprehensible racist and misogynist. Yet politicians of both parties lined up to be on his show. And it wasn't just them. For years after his allegedly despicable performance at that dinner, members of the political press corps kept on appearing with him. It wasn't until 2007, when Imus described the Rutgers women's basketball team as "nappy-headed hoes," that he was finally forced off the air, if only temporarily. (Which made many of his media pals very sad.)

The last time the D.C. establishment had a full WHCD meltdown, it was over the appearance of Stephen Colbert in 2006, who performed as his Bill O'Reilly-esque character from Comedy Central and skewered the attendees to the bone over the sycophantic relationship between the media and the George W. Bush administration. That performance is legendary today, but at the time ,everyone in Washington was appalled. Again.

As Wikipedia reminds me, Washington Post columnist Richard Cohen called Colbert "rude" and a "bully." Rep. Steny Hoyer, D-Md., House Democratic whip at the time, told the Hill that Bush was "the President of the United States, and he deserves some respect." Right-wing operative Mary Matalin called Colbert's performance a "predictable, Bush-bashing kind of humor" and columnist Ana Marie Cox said that Colbert was no hero and sagely observed that "comedy can have a political point but it is not political action."

Colbert's routine was savage toward the press, but in subsequent years they all couldn't wait to get booked for interviews on his show.

Now we have the press corps calling for the fainting couch over Michelle Wolf's comedy act in what appears to be a once-a-decade bonding exercise between the media and the administration. Journalists are defending the White House against the rude depredations of Big Comedy, while the Trump administration pretends that it and the Washington press corps are victims of the coarsening of our patriotic institutions.

Needless to say, this has never been more fatuous than it is right now. While journalists, celebrities and politicians all preened on the red carpet, President Trump was in Michigan calling the press fake, dishonest and despicable, as usual. His worked-up followers stood in front of the media and also preened for the cameras, calling them "degenerate filth."

This Trump supporter repeatedly yelled at the press, calling media “degenerate filth” and to get out of his country… https://t.co/kW4yYLcQEE
— Brianna Sacks (@Brianna Sacks) 1524963664.0

If anyone thinks that comedians pulling their punches at black-tie Washington events will do anything to change this dynamic, they are fooling themselves.

The White House Correspondents' Dinner is a kabuki dance performed by people who want to pretend that sharing one night where they can all dress up in fancy clothes and enjoy their mutual fame is desirable and useful to the government and the system. Every decade or so they also need to pretend to be offended on each others' part when the comedian they hire to roast themselves "takes it too far" by pointing out what a farce it all is.

If Donald Trump does one good thing during his misbegotten presidency, perhaps it will be to put an end to this charade once and for all.