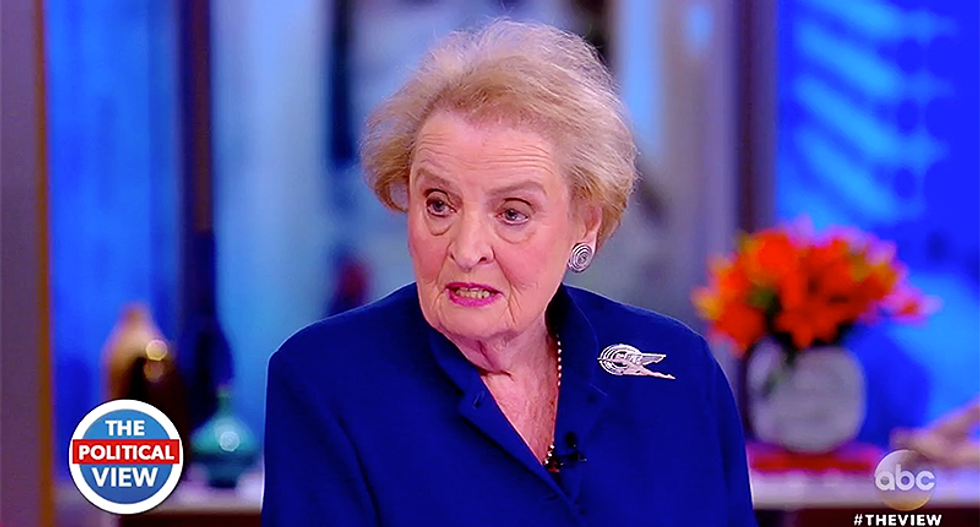 Former Secretary of State Madeleine Albright told the women of "The View" that President Donald Trump is one of the most dangerous presidents Americans have had.

"I really do think -- one of the things that I do write about is that I think Trump is the most undemocratic president we have had in American history," she explained to the table of co-hosts. "And part of what he is doing is trying to undermine democratic processes."

She cited the first article of the Constitution, which deals with the powers of Congress, saying that it's time for them to act.

"I'm saying it's Article I time," she said. "They need to fulfill their responsibilities and make sure that they are an equal branch of government and that we can't have a president who doesn't tell the truth and who also is taking in his own hands the law. So, I think it would be a disaster."

On Syria, Albright said that it seems that Trump has no idea what he's doing.

"Trump can't make up his mind about what he wants to be doing about Syria," she explained. "So, last week he says he wants to pull the troops out, and [Sen. John] McCain (R-AZ) said it emboldened [Syrian President Bashar Al] Assad which I think it did. He probably had plans to do this kind of thing any but we can't have a policy of one-offs."

She went on to say that there doesn't seem to be any kind of strategy from Trump or the White House.

"And I really do think that this is one of the problems with Trump. He doesn't have any strategies, he just has tweets," she said.