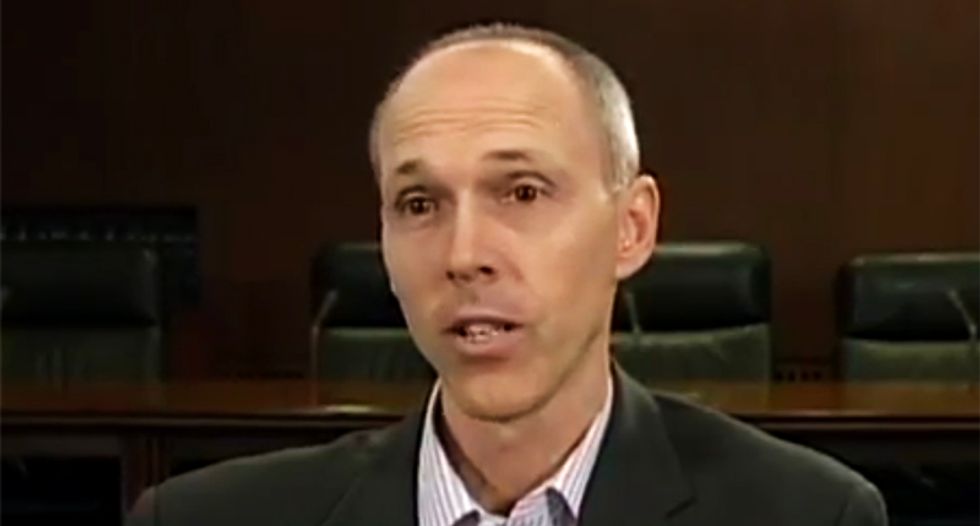 A Republican Minnesota state representative has been stripped of a committee chairmanship by his party while he is being investigated for "inappropriate touching" of a sexual abuse activist at his apartment, the Pioneer Press is reporting.

According to the report,  the unidentified woman filed a report with the St. Paul Police Department accusing State Rep. Rod Hamilton (R–Mountain Lake) of touching her without permission on April 13.

The woman, who works as an advocate for a sexual violence center, told investigators, Hamilton, "stroked her hair, traced the outline of her ear with his finger, kissed her on the cheek, touched her hands and hugged her 'against her wishes,'" the report states.

In response to the allegations, House Speaker Kurt Daudt (R) and Majority Leader Rep. Joyce Peppin (R) announced that the lawmaker has been suspended from his agricultural committee chairmanship while the House Human Resources Department investigates the allegations.

In response to the charges, Hamilton issued a statement saying, "I intended to offer comfort and compassion to a person who was going through a difficult time. I now understand that my actions, while well-intentioned may be viewed differently by a survivor of sexual assault, and that it may have caused additional pain and hardship," before adding, "For that I fully apologize."

According to a St. Paul police spokesperson, it is unlikely Hamilton will face criminal charges, saying there is not enough evidence for a criminal case, noting that it's a crime to engage in "nonconsensual sexual contact" that includes touching a victim's "intimate parts," which did not appear to be the case in his incident.

Hamilton told reporters that he self-reported the issue to the HR department and that he had yet to hear from the police.

According to the Pioneer Press, Hamilton has a reputation as a strong advocate for sex crime victims, Hamilton has been an advocate for victims of sex abuse, and has co-authored six different bills related to sex abuse, including eliminating the statute of limitations for sex offenses and establishing a sexual assault prevention program.