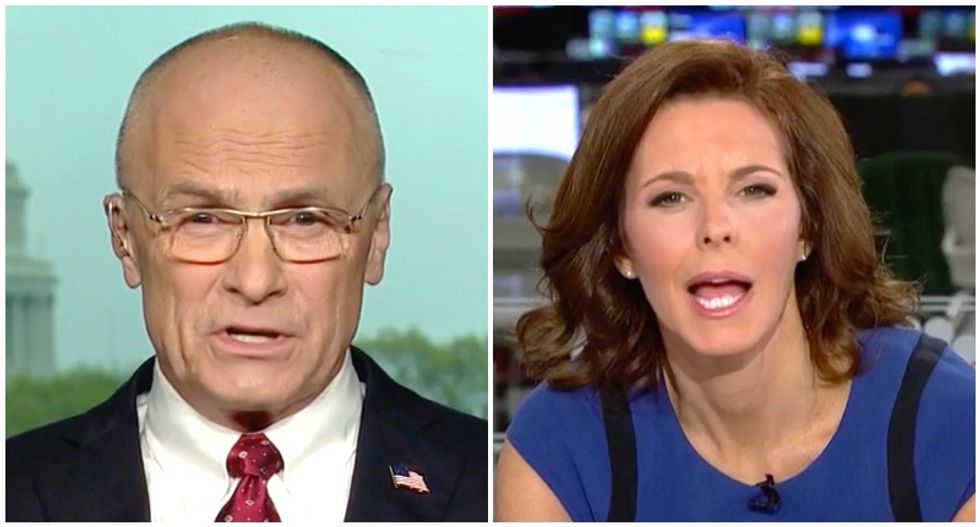 MSNBC’s Stephanie Ruhle on Friday shut down onetime Donald Trump Secretary of Labor nominee Andy Puzder after he hijacked a conversation on the administration’s abysmal vetting record to complain that people who are critical of the president’s picks “approve Hillary Clinton who supported her husband” despite allegations of sexual harassment “and more.”

Puzder—whose own nomination as secretary of labor was derailed after it became clear the Senate did not have enough votes to confirm him—was complaining that the real issue is senators’ unwillingness to approve Trump’s nominees, even as Ruhle noted the Trump administration has a less-than-stellar track record of selecting properly-vetted staffer.

“Is it the Democrats and the media’s fault?” Ruhle asked, listing off Rob Porter, the former White House staff secretary who was fired after the media reported multiple allegations of domestic violence from his former partners.

“We have to do our homework,” Ruhle said.

Journalist and MSNBC contributor Elise Jordan argued it’s “insulting to the American public” to expect the Senate to be a “rubber stamp” for the president. Referring to the Senate debate over Trump’s latest secretary of state pick, Mike Pompeo, Jordan said she opposes Pompeo’s appointment because American “deserves better than someone who is retweeting conspiracy theories.”

“Andy, we’re going to give Elise a moment to talk, but I really don’t think you want to go down the rabbit hole of who supports a chronic sexual harasser?” Ruhle asked. “Do you?”

“Sure,” Puzder replied, arguing “we changed the rule when Bill Clinton was president.”

“Before Bill Clinton, we never would have let somebody stay in office like that,” he said. “Now there’s a Republican in office and you want to change the rules.”

Watch the panel go off-the-rails below, via MSNBC: