MSNBC's Joe and Mika bust Trump for bungling another Cabinet pick: 'They're not looking for quality' 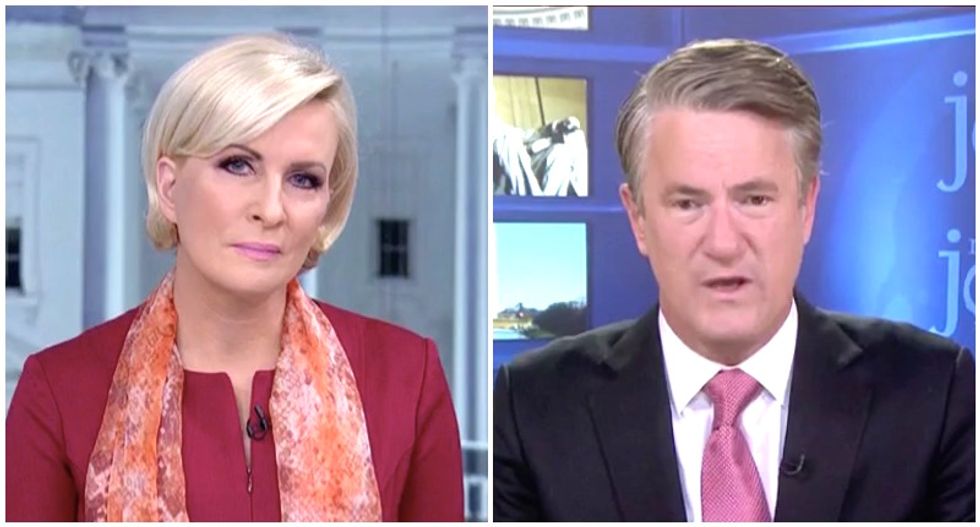 The "Morning Joe" hosts reacted to reports that White House physician Ronny Jackson's nomination to lead the Department of Veterans Affairs was in jeopardy as lawmakers review his personal and professional conduct.

"You don't have to be one of those people that work at circuses and, look, 'Hey, I can guess your weight,'" Scarborough said, mocking Jackson's flattering health report on the president. "Donald Trump weighs a hell of a lot more than 239 pounds."

"That was embarrassing," he continued, "but the topper of it all, the piece de resistance, was when he said, it sounded like Hitler's doctor -- I'm sorry. You know what, his genes are so good ... he could live to be 200 years old. But seriously, remember when (Steve) Mnuchin was on stage, talking about Donald Trump's superior genes. 'He has superior genes, he has the best DNA of anybody I've ever met.' The doctor did the same thing, saying his genetics, his genes, his DNA is so good that he could live to be 200 years old."

Jackson has been accused of excessive drinking on the job, improperly dispensing medication and creating a hostile work environment, and Scarborough lambasted the president for picking him to oversee the VA.

"This man is not the man, regardless of whether he says Donald Trump has superior genes and could live to be 200 years old," Scarborough said. "There are a lot of people who will die young if you get the wrong person in the VA that can't fix the operations there."

Brzezinski agreed that Trump preferred to stock his Cabinet with loyalists and sycophants.

"It's clear they're not looking for quality," she said. "That's been made clear many times over."

The co-hosts then moved on to embattled EPA administrator Scott Pruitt, who has lost the support of at least four Republican lawmakers amid an ongoing ethics scandal.

"If you look at the sheer number of incidents that have been reported on this man, it seems that Scott Pruitt, again, just by sheer volume has to be one of the more ethically challenged, grandiose Cabinet members," Scarborough said, "not only of this administration, but of any administration that I remember in my lifetime."

"It seems like the guy has been cutting corners and profiting off of public service, whether it was back in Oklahoma or whether it was here, getting, taking shortcuts, living large like he's (on Led) Zepellin's '71 tour," he continued. "I just don't know how much longer he can survive."

C-host Willie Geist marveled at the allegations against Pruitt.

"It's actually, even by Washington standards, the sense of entitlement we're seeing here is absolutely staggering," Geist said. "Somebody who rolls into Washington as the attorney general from the state of Oklahoma, comes in, and believes that he is, I don't know, secretary of state, head of the CIA, something larger position, more significant perhaps than the one he holds, and also doesn't understand the job -- which is the air and the water clean, not to be flying all over the world with your entourage."

Geist was shocked that Republicans continued to publicly support Pruitt.

"I don't know what else they're looking for, what more do you need to see to understand that he's not the right guy for the job," Geist said. "I've heard people around the White House saying finally, yeah, probably it's time for him to go, but President Trump doesn't want to be told what to do by the press. He doesn't want to be pushed into a corner."