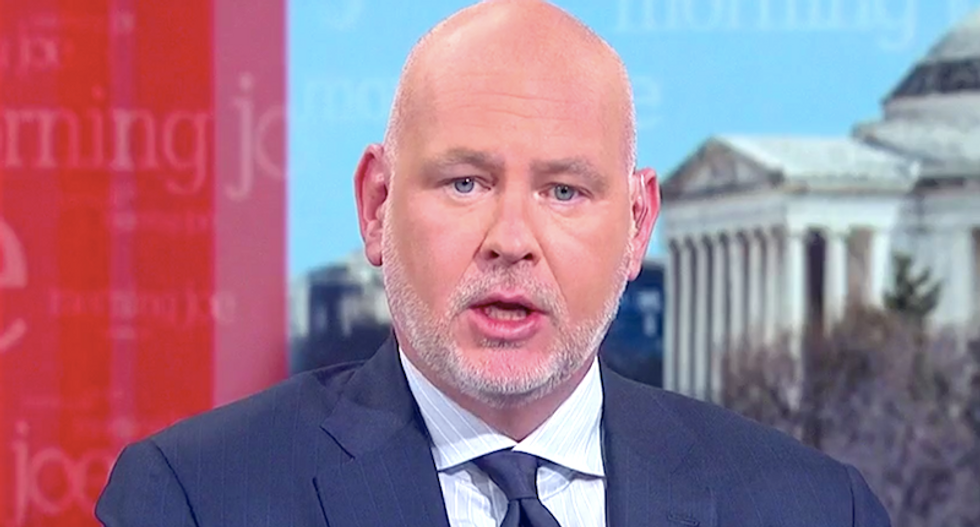 Republican strategist Steve Schmidt said President Donald Trump's incompetence was on full display now that he's purged his White House of naysayers and replaced them with flunkies -- or no one at all.

MSNBC's Joe Scarborough said the past week of Trump's attacks showed he was no longer constrained by presidential norms, and the "Morning Joe" host warned that the U.S. was being dragged into a dark place.

"The lies, the misrepresentations, the distortions, the abuses of constitutional norms, the dictatorial type actions where he's actually targeting one of the most innovative companies in America for political purposes, it seems like we're about to go into hyperdrive," Scarborough said.

Schmidt agreed, and said that Trump's disrespect for the rule of law was matched only by his inability to carry out the duties of his job.

"No doubt about it, he has put on a full-on clinic of incompetence over the last week, the likes of which we've never seen around the office of president of the United States," Schmidt said. "As you point out, there is zero net illegal immigration coming across the southern border, and, in fact, the American border with Mexico does not need to be militarized."

The GOP campaign strategist said Trump was about to severely damage the U.S. economy because he didn't understand how it actually works.

"We see now all of his trade rhetoric being actualized, being actualized in a way that have a profound impact on actual American workers as the Chinese and other countries retaliate," Schmidt said. "For example, when we look at NAFTA, we look at North America, we look at the Canadian/U.S. trade relationship, there is more than a trillion dollars that flows across the border between the United States and Canada in integrated supply chains in Canada and the United States. Should he disrupt that, it will have a profound impact on the American economy."

He said the president's statements and actions were already making investors jittery, and he warned the consequences would eventually spread.

"We saw his incompetence (Tuesday) affect markets, down hundreds of points at the opening, and there's no other reason driving that but this president's policy actions which are based -- founded not on any intellectualism, not on any ideology -- but on complete nonsense," Schmidt said.

Trump was hurting U.S. standing in the world by attacking allies and threatening to back out of international agreements, all while standing by Russian president Vladimir Putin.

"We're seeing a year-plus in a profoundly incompetent president out of his depth, no idea what he's talking about on a range of issues, and now the American people I suspect are about to start paying the bill for his incompetence," Schmidt said.

'They can’t do this to me': Trump threatened to sue Congress following his first impeachment, new book reveals

Former President Donald Trump wanted to retaliate against Congress after the House of Representatives endorsed two articles of impeachment against him.

According to HuffPost, the former president threatened to take legal action against Congress following his first impeachment. The allegation was detailed in the book “Confidence Man: The Making of Donald Trump and the Breaking of America,” written by The New York Times' Maggie Haberman.

The James Webb and Hubble telescopes on Thursday revealed their first images of a spacecraft deliberately smashing into an asteroid, as astronomers indicated that the impact looks to have been much greater than expected.

The world's telescopes turned their gaze towards the space rock Dimorphos earlier this week for a historic test of Earth's ability to defend itself against a potential life-threatening asteroid in the future.