A neuroscientist explains what could be wrong with Trump supporters’ brains 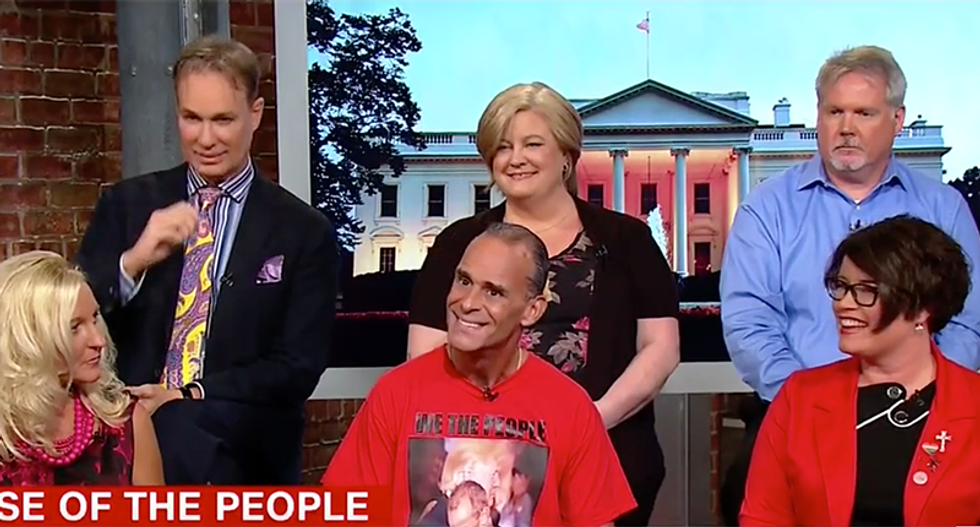 There’s no doubt that Donald Trump has said many things that would have been political suicide for any other Republican. And almost every time he made one of these shocking statements, political analysts on both the left and the right predicted that he’d lose supporters because of it. But as we have clearly seen over the past year, they were dead wrong every time. Trump appears to be almost totally bulletproof.

The only thing that might be more perplexing than the psychology of Donald Trump is the psychology of his supporters. In their eyes, The Donald can do no wrong. Even Trump himself seems to be astonished by this phenomenon. “I could stand in the middle of Fifth Avenue and shoot somebody, and I wouldn’t lose any voters, OK? It’s, like, incredible.”

Senator John McCain, who has been a regular target for Trump, has a simple explanation for his unwavering support. “What he did was he fired up the crazies.”

While the former Republican presidential nominee may be on to something, he doesn’t exactly provide a very satisfying scientific explanation.  So how exactly are Trump loyalists psychologically or neurologically different from everyone else? What is going on in their brains that makes them so blindly devoted?

Some believe that many of those who support Donald Trump do so because of ignorance — basically they are under-informed or misinformed about the issues at hand. When Trump tells them that crime is skyrocketing in the United States, or that the economy is the worst it’s ever been, they simply take his word for it.

The seemingly obvious solution would be to try to reach those people through political ads, expert opinions, and logical arguments that educate with facts. Except none of those things seem to be swaying any Trump supporters from his side, despite great efforts to deliver this information to them directly.

Studies have shown that people who lack expertise in some area of knowledge often have a cognitive bias that prevents them from realizing that they lack expertise. As psychologist David Dunning puts it in an op-ed for Politico, “The knowledge and intelligence that are required to be good at a task are often the same qualities needed to recognize that one is not good at that task — and if one lacks such knowledge and intelligence, one remains ignorant that one is not good at the task. This includes political judgment.” Essentially, they’re not smart enough to realize they’re dumb.

And if one is under the illusion that they have sufficient or even superior knowledge, then they have no reason to defer to anyone else’s judgment. This helps explain why even nonpartisan experts — like military generals and Independent former Mayor of New York/billionaire CEO Michael Bloomberg — as well as some respected Republican politicians, don’t seem to be able to say anything that can change the minds of loyal Trump followers.

Out of immense frustration, some of us may feel the urge to shake a Trump supporter and say, “Hey! Don’t you realize that he’s an idiot?!” No. They don’t. That may be hard to fathom, but that’s the nature of the Dunning-Kruger effect — one’s ignorance is completely invisible to them.

Science has unequivocally shown that the conservative brain has an exaggerated fear response when faced with stimuli that may be perceived as threatening. A classic study in the journal Science found that conservatives have a stronger physiological reaction to startling noises and graphic images compared to liberals. A brain-imaging study published in Current Biology revealed that those who lean right politically tend to have a larger amygdala — a structure that is electrically active during states of fear and anxiety. And a 2014 fMRI study found that it is possible to predict whether someone is a liberal or conservative simply by looking at their brain activity while they view threatening or disgusting images, such as mutilated bodies. Specifically, the brains of self-identified conservatives generated more activity overall in response to the disturbing images.

So how does this help explain the unbridled loyalty of Trump supporters? These brain responses are automatic, and not influenced by logic or reason. As long as Trump continues his fear mongering by constantly portraying Muslims and Mexican immigrants as imminent dangers, many conservative brains will involuntarily light up like light bulbs being controlled by a switch. Fear keeps his followers energized and focused on safety. And when you think you’ve found your protector, you become less concerned with remarks that would normally be seen as highly offensive.

The theory is based on the fact that humans have a unique awareness of their own mortality. The inevitably of one’s death creates existential terror and anxiety that is always residing below the surface. In order to manage this terror, humans adopt cultural worldviews — like religions, political ideologies, and national identities — that act as a buffer by instilling life with meaning and value.

Terror Management Theory predicts that when people are reminded of their own mortality, which happens with fear mongering, they will more strongly defend those who share their worldviews and national or ethnic identity, and act out more aggressively towards those who do not. Hundreds of studies have confirmed this hypothesis, and some have specifically shown that triggering thoughts of death tends to shift people towards the right.

Not only do death reminders increase nationalism, they influence actual voting habits in favor of more conservative presidential candidates. And more disturbingly, in a study with American students, scientists found that making mortality salient increased support for extreme military interventions by American forces that could kill thousands of civilians overseas. Interestingly, the effect was present only in conservatives, which can likely be attributed to their heightened fear response.

By constantly emphasizing existential threat, Trump creates a psychological condition that makes the brain respond positively rather than negatively to bigoted statements and divisive rhetoric. Liberals and Independents who have been puzzled over why Trump hasn’t lost supporters after such highly offensive comments need look no further than Terror Management Theory.

According to a recent study that monitored brain activity while participants watched 40 minutes of political ads and debate clips from the presidential candidates, Donald Trump is unique in his ability to keep the brain engaged. While Hillary Clinton could only hold attention for so long, Trump kept both attention and emotional arousal high throughout the viewing session. This pattern of activity was seen even when Trump made remarks that individuals didn’t necessarily agree with. His showmanship and simple messages clearly resonate at a visceral level.

Essentially, the loyalty of Trump supporters may in part be explained by America’s addiction with entertainment and reality TV. To some, it doesn’t matter what Trump actually says because he’s so amusing to watch. With Donald, you are always left wondering what outrageous thing he is going to say or do next. He keeps us on the edge of our seat, and for that reason, some Trump supporters will forgive anything he says. They are happy as long as they are kept entertained.

Of course these explanations do not apply to all Trump supporters. In fact, some are likely intelligent people who know better, but are supporting Trump to be rebellious or to introduce chaos into the system. They may have such distaste for the establishment and Hillary Clinton that their vote for Trump was a symbolic middle finger directed at Washington.

So what can we do to potentially change the minds of Trump loyalists before voting in 2020? As a cognitive neuroscientist, it grieves me to say that there may be nothing we can do. The overwhelming majority of these people may be beyond reach, at least in the short term. The best we can do is to motivate everyone else to get out to the booths and check the box that doesn’t belong to a narcissistic nationalist who has the potential to damage the nation beyond repair.