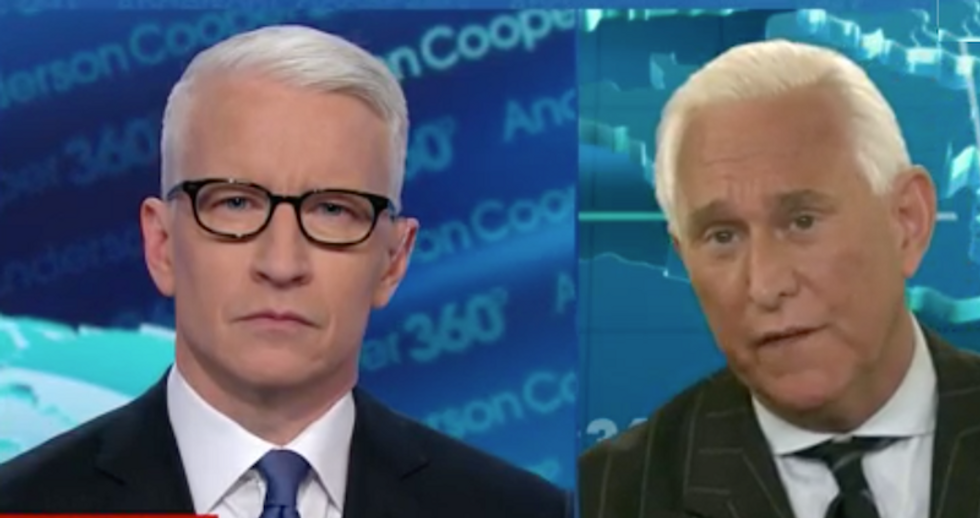 Roger Stone lied about knowing the date Wikileaks planned to release hacked emails from the DNC.

Now, it's just a matter of determining when.

On Friday, the king of dirty tricks went on Anderson Cooper's CNN show and said he did not know what Wikileaks had planned.

This stands in sharp contrast with what he tweeted at the time: "Wednesday @HillaryClinton is done. #Wikileaks."

Now, an interview that pointed out the difference has been revealed. On October 2, 2016, Stone appeared on the the InfoWars' radio show, an extremist media outlet known for spinning wild conspiracies about pizza shop sex rings and "crisis actors."

"Now, an intermediary met with him (Assange) in London recently — who is a friend of mine and a friend of his, a believer in freedom," Stone said on the show. "I am assured that the motherlode is coming Wednesday. It wouldn't be an October surprise if I told you what it was, but I have reason to believe that it is devastating because people with political judgment who are aware of the subject matter tell me this. So right now, you see a terrible scrambling by the Clintonites to attempt to discredit Assange, to try to soften the blow."

The emails were not released that Wednesday, October 5, but on that same day, Stone wrote on Twitter, "Libs thinking Assange will stand down are wishful thinking. Payload coming #Lockthemup."

During the interview, Stone also claimed that he was poisoned by the intelligence community but refused to provide proof.