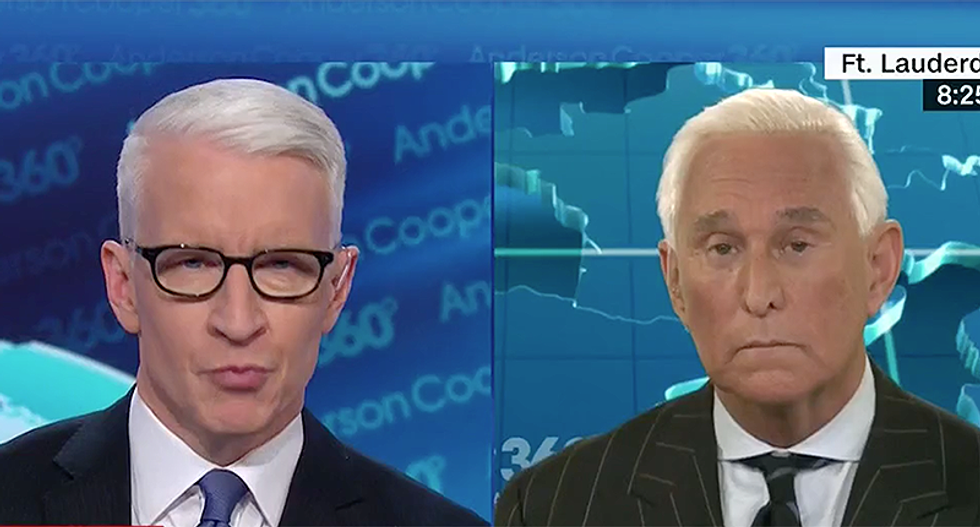 Roger Stone, a close confidante to President Donald Trump, spent Friday speaking to Anderson Cooper about the Russia investigation as well as the president himself.

Stone began with a commentary on former aide Sam Nunberg, who has told multiple media outlets about things Stone would pop off about, namely his "lunch" with WikiLeaks' Julian Assange. He described the former aide as a neurotic staffer, who would call 30 to 40 times daily. Stone noted that when he wouldn't answer the phone, Nunberg would "get very agitated."

Cooper also brought up the accusations that someone tried to poison Stone. In wake of the nerve agent attack on former Russians in the U.K. Polonium poisoning is serious and is responsible for the death of Alexander Litvinenko, a former officer of the Russian Federal Security Service and KGB.

"When you are poisoned with polonium you die," said CNN's Jim Sciutto later on "AC360."

Cooper hammered Stone about the alleged poisoning, which Stone has been speaking about on InfoWars for over a year. He initially insisted that it was the fault of the intelligence community. Friday he said it was someone trying to make it look like Russians.

"My doctor believes I was poisoned," he told Cooper.

But when pressed on whether he would release medical records or tests done, Stone refused, saying that people should go to InfoWars and see his commentary on it.