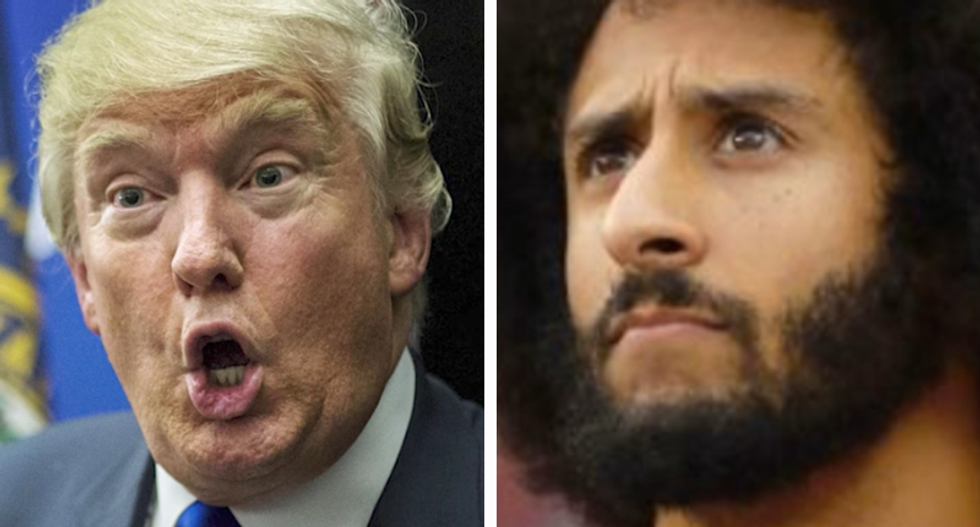 NFL owners all but agreed they were blackballing Colin Kaepernick to appease President Donald Trump, according to newly released audio recordings.

About 30 owners, players and NFL executives met for nearly three hours in October to discuss the president's public attacks on the league and its players over silent racism protests during the national anthem, reported the New York Times.

“Let’s make sure that we keep this confidential,” said commissioner Roger Goodell at the start of the meeting.

According to the leaked audio, players wanted to know why Kaepernick remained unsigned, despite leading the San Francisco 49ers to the 2013 Super Bowl and 2014 NFC Championship game.

“If he was on a roster right now, all this negativeness and divisiveness could be turned into a positive,” said Philadelphia Eagles defensive lineman Chris Long at the meeting, adding that he wouldn't "lecture" teams on which quarterback to sign. "We all agree in this room as players that he should be on a roster.”

Eagles owner Jeffrey Lurie told Long that fighting for social justice was not "about one person," and New England Patriots owner Robert Craft -- a longtime Trump supporter -- complained "this kneeling" was another "elephant in the room."

“The problem we have is, we have a president who will use that as fodder to do his mission that I don’t feel is in the best interests of America,” Kraft said. “It’s divisive and it’s horrible.”

Owners were deeply concerned about the president's criticism, saying his Twitter attacks had turned many fans against the NFL.

“We’ve got to be careful not to be baited by Trump or whomever else,” said Lurie, who called Trump's presidency "disastrous." “We have to find a way to not be divided and not get baited.”

Buffalo Bills owner Terry Pegula was terrified that Trump would keep up the attacks.

Jacksonville Jaguars owner Shahid Khan assured other owners that the worst from Trump was behind them, but Houston Texans owner Bob McNair took a shot at protesting players.

"You fellas need to ask your compadres, fellas, stop that other business, let’s go out and do something that really produces positive results, and we’ll help you,” McNair said.

“I feel like he was hung out to dry,” said Reid, who wore a Kaepernick T-shirt over his dress shirt and tie. “Everyone in here is talking about how much they support us. Nobody stepped up and said we support Colin’s right to do this. We all let him become Public Enemy No. 1 in this country, and he still doesn’t have a job.”

Reid, whose contract expired after the season, also remains unsigned after he refused to agree to end his protest.

Pegula suggested finding a spokesman to promote the league and its good works like the NRA had found in actor Charlton Heston, and former NFL player Anquan Bolding urged owners to talk about social justice.

“For us to have a face, as an African-American, at least a face that could be in the media," Pegula said, "we could fall in behind that.”

Kaepernick didn't come up again after that exchange, and he remains unsigned while pursuing a labor grievance against NFL owners for alleged collusion.