Seth Meyers nails Paul Ryan retirement as 'clogging a toilet and leaving': 'You gave us Trump -- you should have to live with him' 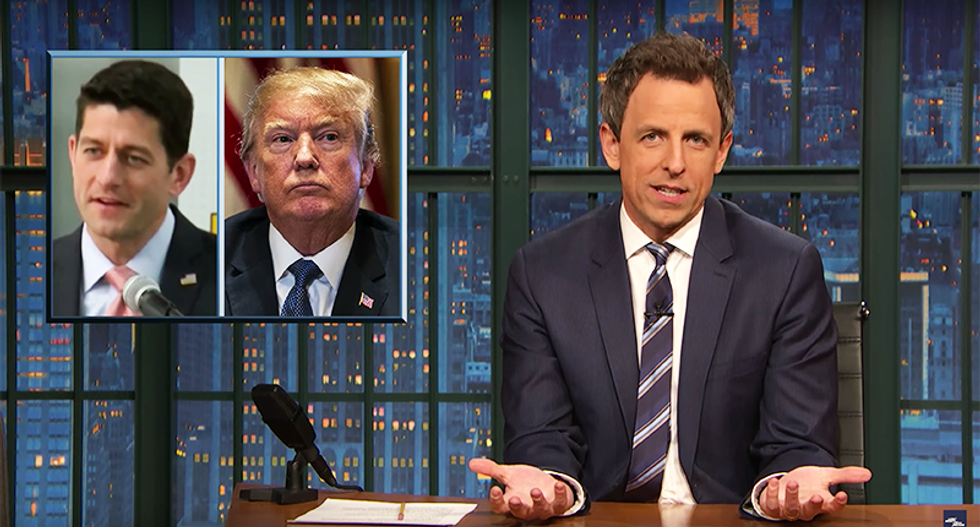 Comedian Seth Meyers has been dogged in his mockery of the possibility of an alleged "Russian pee tape" of President Donald Trump and prostitutes in a Moscow hotel.

In his Thursday evening show, the "Late Night" host played a clip of the excerpt of a book by former FBI Director James Comey alleging that Trump asked multiple times that Comey look into the legitimacy of a tape existing. Trump claimed it was for Melania's peace of mind.

"Oh, my God, it's real," a grinning Meyers said after hearing the excerpt. "It has to be. Why would you ask the FBI director to investigate a pee tape if you knew for a fact that the pee tape definitely didn't exist? It's like me saying, 'Can you make sure there isn't a tape of me in 1994 doing 'Thunder Road' at karaoke and then barfing and then slipping on the barf and farting?'"

Meyers explained that he always though the tape was real and he knew it because Trump's own comments in his interview with Fox News after the news broke.

"You'd say, 'That's insane!' or 'What are you talking about!?'" Meyers claimed an innocent person would state. Trump, however, went another route.

Meyers emphasized the comment from Trump "If it came out, I would be embarrassed."

When discussing the recent resignation of House Speaker Paul Ryan, Meyers was furious saying, "No! You gave us Donald Trump, you should have to live with him! I mean, you can't just clog up the toilet and leave the dinner party. Stay here and get a plunger."

He criticized Ryan for spending the past year basically pretending that Trump didn't even exist. In case after case, reporters asked Ryan to comment on Trump's latest twitter tirades and again and again the Wisconsin Congressman refused.

"You're the Speaker of the House. You don't have the luxury of dealing with the president the way the rest of us deal with a crazy person on the subway. 'I'm gonna bomb Syria! Wooooo!' Oh, boy," he joked pretending to put headphones in his ears.

Meyers noted that one of the things Ryan has done is remind Americans over and over that President Donald Trump delivered the Republican majority to the branches of government. He specifically quoted Ryan saying one of his rules has always been to "aim high."

"Aim high?" Meyers asked. "You supported Donald Trump. Did you aim high or were you high when you aimed?"