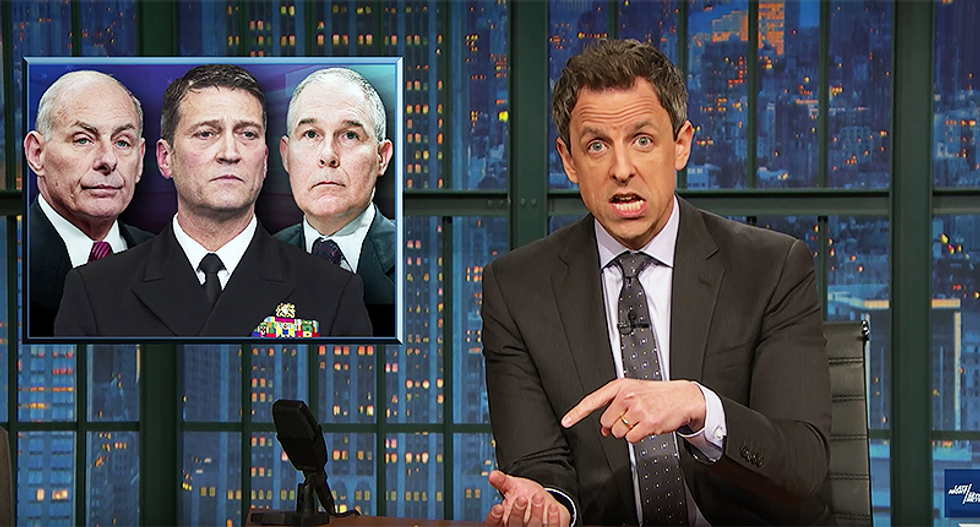 President Donald Trump keeps moving his cabinet secretaries around in an effort to rid himself of people who aren't loyal enough to him.

The latest is that Trump wants to kick Attorney General Jeff Sessions to the curb and substitute EPA administrator Scott Pruitt in his place. The story broke after Trump had already moved his doctor to take over the Veterans Administration. Before that was chief of staff John Kelly.

"Trump just keeps moving staff around like he's rearranging deck chairs on the Titanic after it already sunk," Meyers said. "Our only hope is that he gets carried away and accidentally replaces himself."

Doing his Trump imitation, Meyers said, "I moved Pence to president. Oh no! Oh no! What's left for me? Janitor!?"

He also noted that this week special counsel Robert Mueller announced that Trump was not a target of the investigation, rather he is still under investigation. Trump allies have been concerned this was a strategy that Mueller was using to trick Trump into giving a deposition where he might perjure himself.

"Maybe it is a trip, but in fairness it's not too hard to trap Donald Trump," Meyers said. "He seems like a guy who would put out mouse traps and then 30 seconds later go, 'Oh, wow! Free cheese!'"

When it came to the revelation that adult film star Stormy Daniels being able to describe the president's genitalia in great detail, Meyers wondered what Trump's denial would be.

"I don't know know if her description is right. It's been years since I've seen it myself, so," Meyers joked.

Watch the full clip of Meyers below: