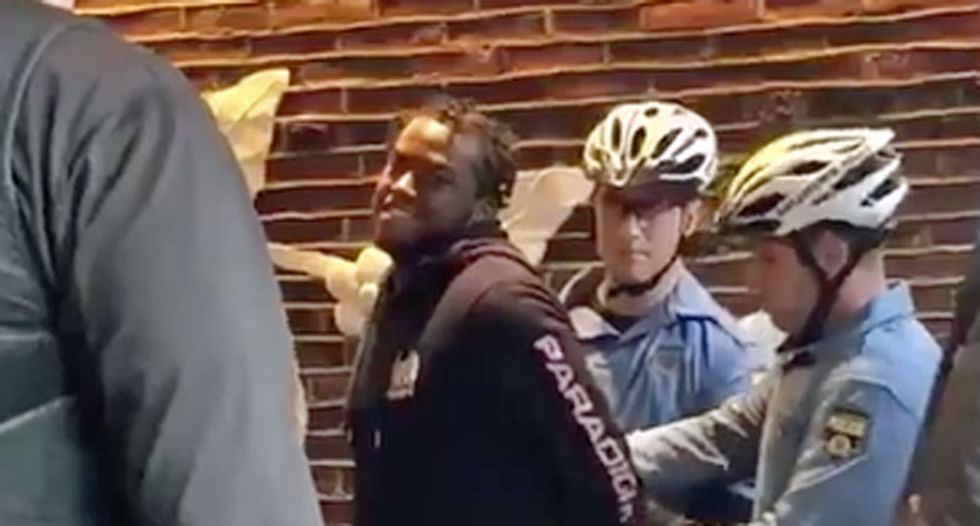 Black man being arrested at a Starbucks in Philadelphia.

Starbucks Coffee apologized on Saturday for an incident at a Philadelphia location when two African American men were removed from the store by over a half dozen police.

On Thursday, video of the police action was posted on Twitter by Melissa DePino.

"The police were called because these men hadn’t ordered anything," DePino reported. "They were waiting for a friend to show up, who did as they were taken out in handcuffs for doing nothing."

The racial implications of the arrest was apparent to the eyewitness.

"All the other white ppl are wondering why it’s never happened to us when we do the same thing," DePino continued.

Both police and Starbucks are investigating.

"We are aware of an incident that occurred on 4-12-18 at the Starbucks Café at 18th and Spruce," Philadelphia Police acknowledged. "The entire incident, including the actions of the responding officers, is under internal investigation."

"We’re aware of the incident on Thursday in a Philadelphia store with 2 guests and law enforcement, resulting in their removal," the company said. "We’re reviewing the incident with our partners, law enforcement and customers to determine what took place and led to this unfortunate result."

By Saturday, Starbucks had investigated enough to apologize.

We apologize to the two individuals and our customers for what took place at our Philadelphia store on Thursday. https://t.co/suUsytXHks
— Starbucks Coffee (@Starbucks Coffee) 1523725183.0

"We apologize to the two individuals and our customers and are disappointed this led to an arrest," Starbucks said. "We take these matters seriously and clearly have more workk to do when it comes to how we handle incidents in our stores."

"We are reviewing our policies and will continue to engage with the community and the police department to try to ensure these types of situations never happen in any of our stores," Starbucks promised.

@Starbucks The police were called because these men hadn’t ordered anything. They were waiting for a friend to show… https://t.co/gQ6HFw3fYZ
— Melissa DePino (@Melissa DePino) 1523567534.0