Here are some surprising similarities between James Comey and Donald Trump 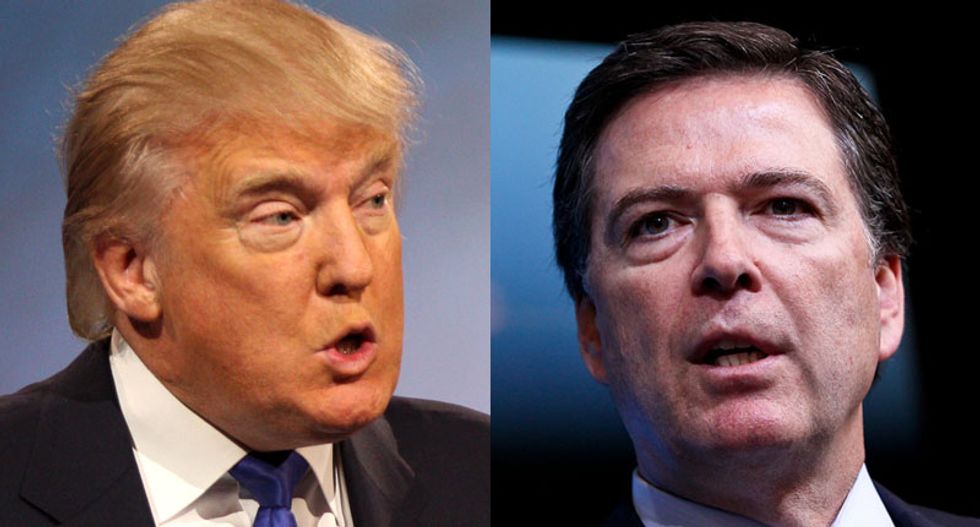 Donald Trump is spending the next few days at Mar-a-Lago (which he erroneously claimed on Tuesday was always meant to be the "summer White House," except that Jimmy Carter was too cheap to keep it up). He's officially there for a meeting with Japanese Prime Minister Shinzo Abe, but Trump's staff reportedly gets nervous whenever he spends time at the Florida estate: He watches too much TV and gets too much input from outsiders who have no idea what they're talking about. Right now, he's apparently more agitated than they've ever seen him about the legal mess his consigliere Michael Cohen finds himself in.

Mike Allen at Axios quoted a source who told him:

The guys that know Trump best are the most worried. People are very, very worried. Because it’s Michael [effing] Cohen. Who knows what he’s done? People at the Trump Organization don’t even really know everything he does. It’s all side deals and off-the-books stuff. Trump doesn’t even fully know; he knows some but not everything. Cohen thinks he’s Ray Donovan [the Showtime series starring a fixer for Hollywood's elite]. Did you see the photos of him sitting outside on the street with his buddies smoking cigars? Makes it look like a Brooklyn social club. I’ll tell you who’s worried. The principal.

By all accounts, Trump is more concerned about this than about the Russia investigation, although he reportedly sees it as an end run by Robert Mueller's office to try to take him down by any means necessary. In the president's mind it's all connected -- and now that the feds have all of Cohen's records, even pardoning him wouldn't solve the problem. They will know everything.

I've been writing here at Salon about Trump's corruption and possible criminality ever since he burst on the scene in 2015, as have many other observers. There is a tremendous amount of evidence right out there on the record that he has been involved with known criminals like the Russian-born Felix Sater (a longtime friend of Michael Cohen) who has ties to the Mafia and was reportedly at various times a government informant. Trump's casinos were cited for money laundering more often than any others in the country and were known to be frequented by members of the Russian mob. Many of his overseas ventures in places like Azerbaijan, Indonesia and Brazil are linked to criminal enterprises and were brokered or arranged with the help of his trusty fixer, Michael Cohen.

The question that must be asked is this: What would possess a man with such a shady track record in business to expose himself to the kind of scrutiny that comes with being president of the United States? Did he truly believe that third-rate operators like Michael Cohen could successfully cover his tracks?

Well, this is Trump we're talking about, so yes, he probably did. He is a narcissistic fool. He is also defined by one of the greatest of all character flaws: hubris, which in classical Greek tragedy is when overconfidence leads the hero to overstep the boundaries of human limitations and assume a godlike status. The gods are not amused and put the hero in his place by reminding him of his mortality.

It's somehow inevitable that as Trump draws near this denouement, he would be facing off against another person who has made some disastrous choices due to an overweening confidence in his own judgment. I'm speaking of former FBI director James Comey, who would undoubtedly be tremendously insulted to have his character compared to his nemesis Donald Trump. But the fact is that Comey too has exhibited tremendous hubris in the way he went about his job at the FBI and how he has tried to explain the momentous decisions that led to his own downfall.

Comey's overconfidence doesn't stem from simple narcissism, as Trump's does. He is afflicted with a vain self-regard for his moral and intellectual superiority. On the interviews for his book tour he has explained that he alone understood the complexity of the political situation involved in the Hillary Clinton email investigation. So he took it upon himself to break the longstanding rules that governed such situations, in order to preserve the integrity of the Department of Justice and the legitimacy of Clinton's imminent victory. The gods certainly got their revenge on him -- and on all the rest of us -- for that arrogant presumption.

The Washington Post's Greg Sargent noted that Comey still has not admitted that he was influenced by the media cacophony about Clinton's emails or that his judgment was flawed when he took it upon himself to ignore the normal rules against discussing closed cases or making any kind of politically charged moves in the days before an election.

He is as unbowed and unrepentant as Trump is, even now rendering his judgment that the constitutional remedy of impeachment would be wrong, without even knowing what the president might end up being charged with:

I think impeaching and removing Donald Trump from office would let the American people off the hook and have something happen indirectly that I believe they're duty bound to do directly. People in this country need to stand up and go to the voting booth and vote their values. And so impeachment, in a way, would short circuit that.

That's a nice sentiment. But the president of the United States may very well be a criminal who has betrayed the country, and his term is not up for nearly three years. That situation is exactly what the remedy of impeachment is designed to address. One is sorely tempted to tell Saint James Comey to please stop helping.

Pitting a flamboyant conman against a moralistic lawman in a battle for American democracy sounds like a clichéd movie plot. But it turns out to be deeper and more complex than we might have assumed. In this tale, our hero and villain are both afflicted with the same character flaw and we really don't know who is going to come out on top.