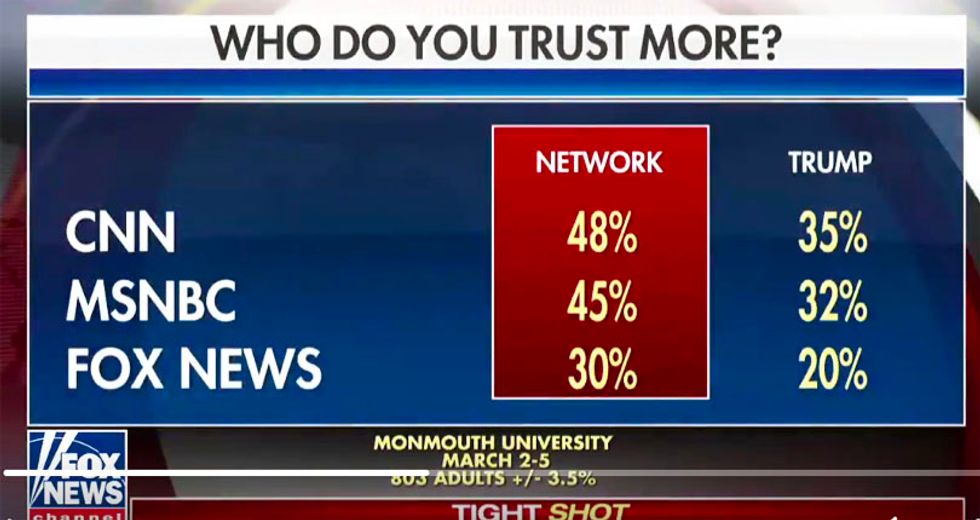 Fox News media analyst Howard Kurtz on Sunday implored his producer to take down a graphic that showed his own network was the least trusted of the big three cable networks.

That is when things took a hilarious turn.

"Speaking of fake news, there is a new poll out from Monmouth University. 'Do the media report fake news regularly or occasionally?' 77 percent say yes," Kurtz exclaimed before noticing the graphic instead showed "Who do you trust more?" with CNN at 48 percent, MSNBC at 45 percent and Fox News bring up the rear at 30 percent.

"That is not the graphic we are looking for. Hold off," the Fox News host protested before pleading, "Take that down, please."

Kurtz later came back to the graphic to discuss the results of the poll, but the numbers showed Fox News still came up short in credibility behind CNN and MSNBC.

Watch the video below via Fox News on Twitter:

.@FrankLuntz: "It's [@POTUS's] own tweets that are causing so much of the trouble... He should be focused on the economy and on taxes." #MediaBuzz pic.twitter.com/hbjdU6G7gz

Kurtz denied Monday in a Facebook post that he "somehow panicked or didn’t want to show the poll graphic." He said the graphic had been taken down because it was shown at the wrong time.

"During the segment, the control room mistakenly posted the graphic early, while I was dealing with the fake news questions. So I calmly asked that it be taken down. About a minute later, I asked for the graphic to be put back on the screen and discussed the finding with my guest, pollster Frank Luntz," he explained.

(Note: Updated with response from Howard Kurtz. Headline has been revised for accuracy.)