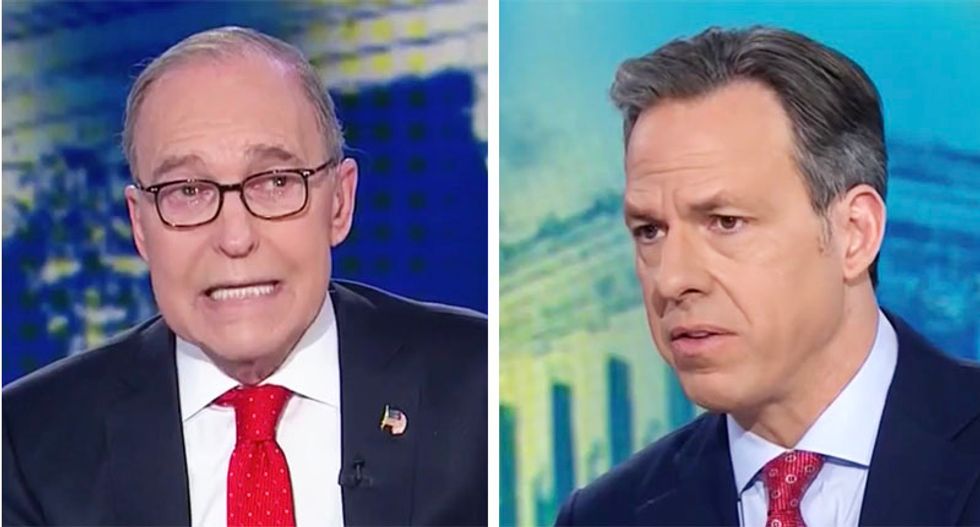 Newly appointed Trump economic adviser Larry Kudlow was put on the spot on by CNN's Jake Tapper on Sunday morning with the host pressing him on the president's announced tariffs that have roiled the stock market and panicked American farmers.

Kudlow, who previously criticized tariffs before taking the administration job, explained that he has had a change of heart and that Trump's tariffs are correct in light of China's actions.

"I think personally we have had to go in and fire a shot across the bow," Kudlow explained. "China's behavior for 20 years now is more than unfair trade practices -- it's illegal trading practices. They are stealing our property rights. They are forcing technology from our companies to be open so they can get it, and they have tall trade barriers that president is somewhat right about and this stuff has to stop."

"No president has had the backbone to take it up publicly before and I think he [Trump] is exactly right," he added. "I say to everybody on this the problem here is China, it's not President Trump. China has been getting away with this for decades. I think it is going to generate very positive results which will grow our American economy."

Tapper then took up the cause of the framers who could be devastated by retaliatory tariffs proposed by China.

"You talk about the good things that Trump has done for the economy," Tapper pressed. "The Dow is down 10 percent under the threat of the trade war and threat of retaliation causing problems for farmers especially. Soybean prices down four percent costing $1.7 billion in crop value. What do you say to those farmers who say ultimately 'I don't like this negotiation, it's hurting my bottom line?'"

"We are talking to them on a daily basis to see," the defensive Kudlow replied, before conceding, "So far I don't think it is fair -- you're right. There has been a bump down in farm commodity prices. I'm not totally sure that this is going to last and this process may turn out to be very benign. You have to take certain risks as you go in. We will see, maybe China will want to come around and talk in earnest. We are growing at 3.1 percent and annual business investment is booming right now."

"You are threatening to undermine that," the CNN host warned.

"The stock market is still up 25 percent plus since the election," the Trump advisor soldiered on. "You talk to a Wall Street guy, profits are the mother's milk. Profits are coming in like gangbusters. I'm not going to predict the stock market, I don't think they will want me to, but I have thoughts on the matter. We will do fine with the earnings."

Brazil's Supreme Electoral Court (TSE) decided on Monday to open an investigation into far-right President Jair Bolsonaro for his statements claiming there will be fraud in next year's elections.

Bolsonaro, who is expected to seek a second term in 2022, has repeatedly said Brazil's electronic voting system is vulnerable to fraud.