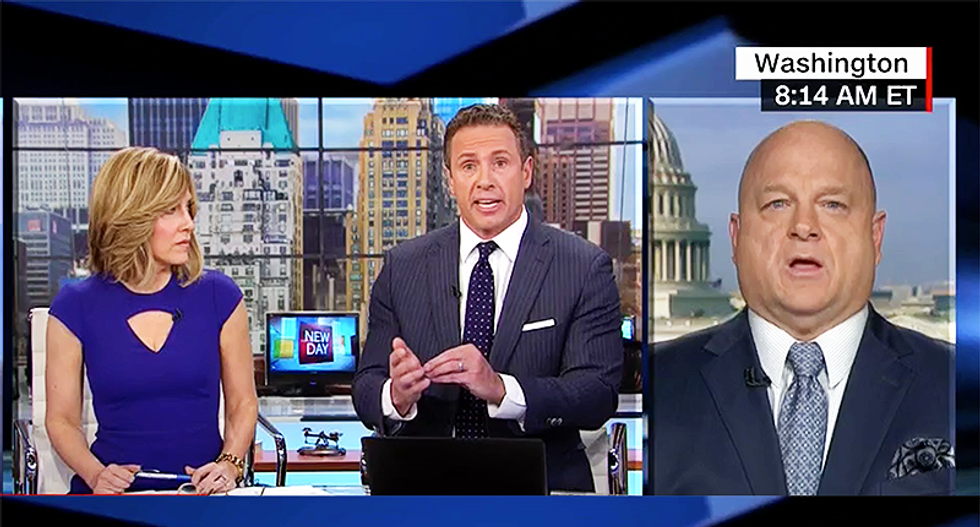 In a Tuesday morning panel discussion, President Donald Trump's ally David Urban insisted that the investigators weren't exactly on the up and up when it comes to the investigation into Trump.

Always the prudent legal analyst, CNN's Chris Cuomo explained that the public has no idea what the warrant and FBI search yielded.

"The tendency to distract from the process is to attack it. 'They found nothing in Mueller,'" Cuomo continued, citing previous comments. "We don't know that. We know they have guilty pleas. we know they have indictment. We don't know what he has on it but people want to rush the process for political advantage. We've seen the same thing coming out of the mouth of the president about this search on [Michael] Cohen."

Cuomo asked Urban about the president's proclamation that "attorney-client privilege is dead."

"It's just not true," Cuomo stated. "You have to call it out and you have to say the people making those arguments are wrong and doing a disservice to the democracy. Will you say that?"

Urban confessed that "attorney-client privilege is alive and well," discounting the president's claims.

Former FBI agent Josh Campbell explained that what Mueller has done in this case is "handing off to a separate independent U.S. Attorney's office and saying, 'You look at this. This doesn't fall within my purview. You run with this.'" He said to have Trump and the GOP go after Mueller is a disservice.

Urban said that everyone "needs to slow down" and "exhale," because people are getting too hysterical about Trump and these topics, implying that it is the president's detractors who are "excited." The president, however, has been seething.

Urban then parroted a GOP talking point, claiming that Mueller has extremely broad parameters to investigate Trump. However, host Alisyn Camerota fact-checked the Trump ally, saying, "Rod Rosenstein laid out the parameters of what Robert Mueller can look at."

She went on to quote Urban's need to "exhale" and asked if Trump should follow that advice. He pivoted to talk about the process about what will develop as the investigations continue. Urban claimed Mueller is safe and the president has no intention of firing the special prosecutor.

"He wants to talk about this," Cuomo cut in. "You know that, Dave. He's mad at these people. He believes that they are not doing him right."

Urban maintained that Trump is "frustrated" and that it was perfectly normal. But he maintained Trump would not fire Mueller.

"Can we just agree on one thing, though?" Campbell asked. "All of what you just said is right. This process needs to play out. Can we agree that it's time to end the open season on the FBI and it's time to end open season on Robert Mueller? Let them do their job without the political attacks and discredit whatever they come up with, can we do that?"

Urban agreed, demanding that the panel declare everyone is innocent until proven guilty.

"Unfortunately, right, cable news, not necessarily this network, lots of folks across the America aren't prepared to give the president that presumptuous," he said.

"And the president of the United States keeps baiting the proposition that it's a corrupt process," Cuomo said. "It works both ways."

Urban accused "both sides" of being problematic and said they need to "dial back the rhetoric."

"Let's remember this, the FBI is not on any one's side," Campbell said. "When we talk about this side, that side, the FBI doesn't care. They're not on sides. They're about following the facts."

Cuomo noted "we get it," saying, the FBI "is like the honey badger."