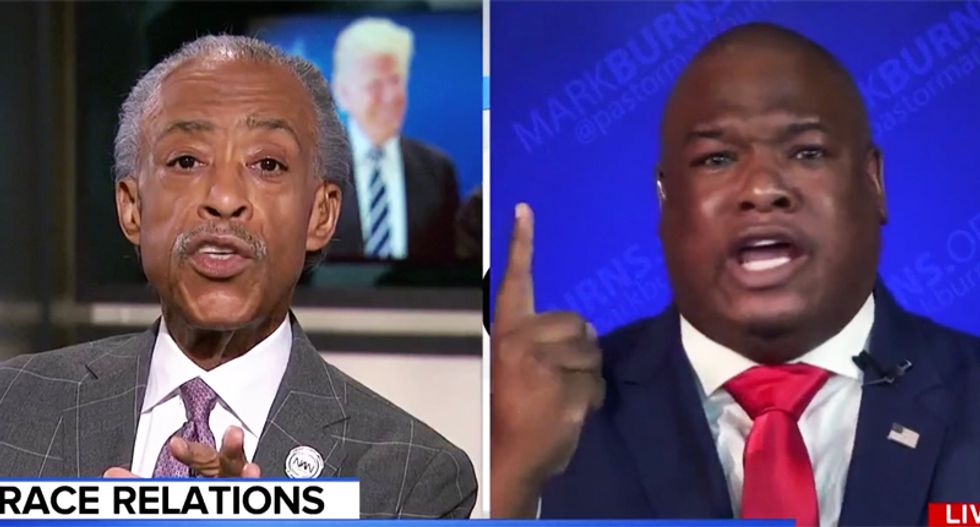 An MSNBC panel hosted by Alex Witt turned into a shouting match when fellow MSNBC host Al Sharpton pressed a black Trump-loving pastor to name a single policy put forward by the president that helps the black community.

What started out with Pastor Mark Burns -- who memorably was booted off MSNBC's AM Joy in January -- defending rapper Kanye West's recent flirtation with Trump, it quickly took a turn for the crazy when the Reverend Sharpton asked Burns how the president is helping African-Americans.

"It shouldn't be a Kanye controversy because he supports President Donald Trump," Burns suggested. "We should be applauding he's a free thinking black man who believes President Trump has policies. Whether you like him personally or not, his policy [sic] is the best for black workers in this country"

"Let me jump in, and Pastor Burns and I do talk and are friendly," Sharpton began. "But I would say that even though I don't fall out with Kanye or Pastor Burns, they should name the policies. If you claim the Democratic Party put blacks in the back of the bus, then they ought to name the policies of Donald Trump what has helped black America."

"So, show me in any instance where the president has reached out to do anything with black America," Sharpton added.

Burns then went on  a rant about how well he personally has done, saying, "What's important for the viewers to understand it is by the sweat of my brow that I am where I am. A man who was once on welfare. writing a book right now called 'From Welfare To The White House.'  I was on food stamps. I've been arrested. I know what it is like to feel belittled because of the color of your skin."

"I also know it was the sweat of my own brow," he continued. "Nobody ever gave you anything, Reverend Al. Yet you're the host of one of the most successful shows in America. We've got this notion that some president has to create this policy because of the color of my skin for me to be successful."

"Can I respond?" Sharpton shot back. "First of all, you and I made it by the sweat of our brows because we were allowed to. Our parents and grandparents were not able to do that. We were able to do it because under Lyndon Johnson we got a Voting Rights Act. You go all the way to President Obama --."

"We made -- ," Burns interrupted, but Sharpton didn't yield.

"Wait a minute, you ask not to be interrupted, I ask for the same respect," Sharpton lectured. "We got affordable care. we got a criminal justice initiative where President Obama commuted the sentence -- you talk about you've been to jail -- he commuted the sentences of nonviolent drug offenders more than the last 11 presidents put together. He sent the Justice Department of Eric Holder into court to maintain our voting rights."

"This president [Trump] and Jeff Sessions said we will not protect the voting rights, we're closing down the Affordable Care Act if we can," he explained. "And we are not dealing with police matters specifically. You have mass incarceration right now, because of the policies of others. I can name you from Johnson all the way through on the policies that Democrats have put through."

At that point Burns and Sharpton engaged in shouting and finger-pointing, while talking over each other as host Witt let it run its course.

You can watch the exchange below via MSNBC: