'They wanted to crawl under the table': Gen. Hayden rips Trump for using military leaders as 'political props' 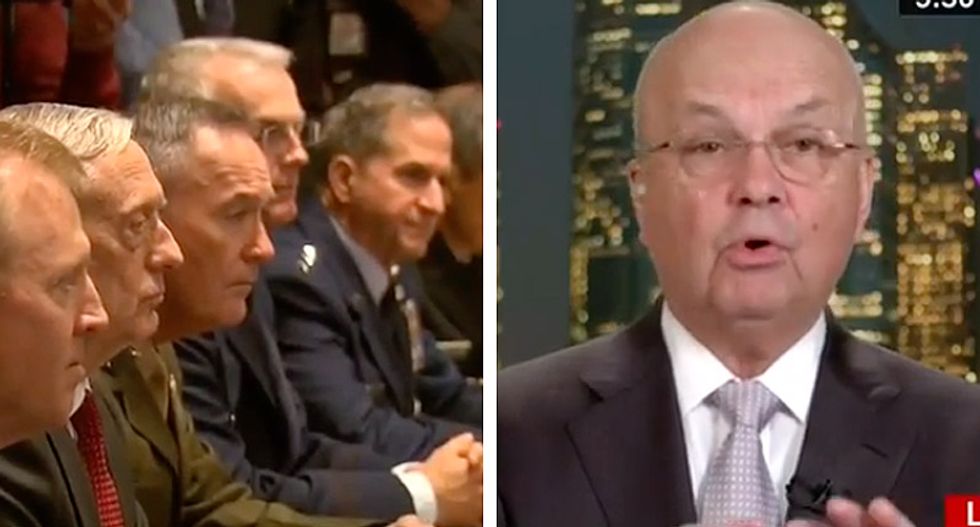 Retired Gen. Michael Hayden on Tuesday slammed Donald Trump for using a meeting of his top military leadership to vent his frustrations about the FBI and special counsel Robert Mueller, remarking that Hayden’s former colleagues “wanted to crawl under the table” during the president’s comments.

Trump on Monday called the FBI raid of longtime personal attorney Michael Cohen “an attack on our country,” something CNN’s Don Lemon points out he never described Russian meddling as. The CNN host asked Hayden what he makes of that.

“Yeah, it just jumps right out at you,” Hayden began. “The president certainly—I mean, we all have this failing—but I think the president has this in a special way: He sees all things through his own personal lens, and with regard to the Russia question, he keeps seeing it with regards to his own legitimacy as president.”

“He made all those really, I think, over-the-top comments,” he continued. “And he did it in the presence of all of America's combatant commanders … They were the props for that. And I think if the president wanted to vent, I think most presidents would not have done it in that setting with those members in the room.”

“What was going through their minds when the president went off on this tangent or tirade?” Lemon asked.

“I know some of them, and I was looking at them,” Hayden said. “They put on their best formal military face, but kind of reading their minds, I think all of them kind of wanted to crawl under the table. They did not want to be there in those circumstances. It's just so inappropriate. We have great deference to civilian authority in the American armed forces, but in return for that, we’re not used as political props.”