WATCH: Alex Jones goes berserk and molests the American flag when he's asked about his links to Russia 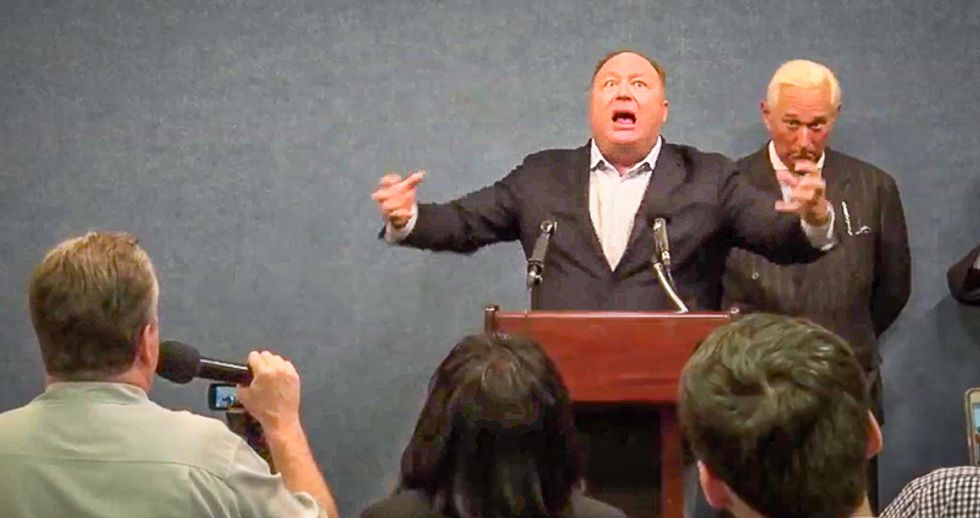 Conspiracy theorist Alex Jones on Tuesday expressed outrage after a questioner asked him about his links to Russia.

During an appearance at the National Press Club, Jones was reminded of his history of publishing articles from Russian publications.

"The Russia thing is such a turnoff for so many people," the questioner said. "And you've got to admit it. You were a favorite of Russia TV a couple of years ago... You've been using material from Russia Today, the Voice of Russia. I could go down the list."

For his part, Jones insisted that he has never been to Russia, but he might go in the future as a "stunt."

"This thing, it's almost like a new religion, a pharisee or something... I publish whole [Russia Today] articles because they let us publish them," the radio host said. "But we also publish stuff from the [the Anti-Defamation League] and the Southern Poverty Law Center that I disagree with. So, it's just not intellectually a fair argument to say, look, he's gone on Russian TV."

"It's what I say!" Jones screamed. "Listen! Christ said you judge a tree by its fruits! I'm Americana, I'm free markets, I'm red-blooded, fire-breathing, '57 Chevy, Marilyn Monroe -- give it to me!"

To make his point, Jones embraced a nearby flag and gave it several kisses.