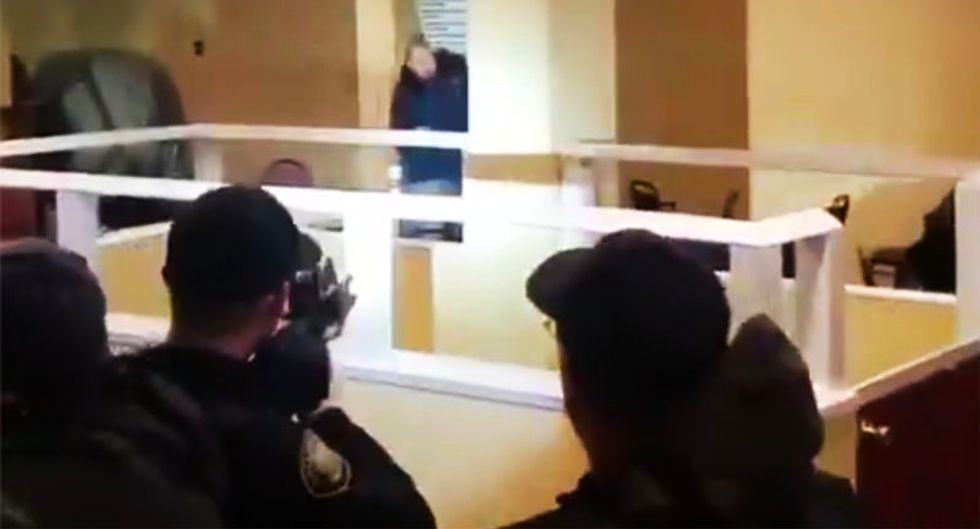 A witness who filmed Portland police gunning down a man in a homeless shelter after he fled from the police for allegedly carjacking an SUV and then waved a knife, called the shooting "justified."

In dramatic video uploaded to Instagram by Morgan Pickering, residents of the shelter can be seen scrambling as eight heavily armed officers track the man down, and then shots are heard.

According to KGW, the unidentified man was killed after police responded to a report of a car crash and the driver fled, with witnesses reporting he was armed.

A search ensued with the suspect tracked down inside inside Cityteam Ministries, located a block away.

According to witness John Terrio, "They [police] yelled some commands to the person and seconds later fired like eight shots in a row."

Posting the dramatic video to Instagram, Pickering noted, "Graphic! Police protected us, had to shoot man," later telling the Oregonian, that he felt the shooting was "justified."

"It was horrific," said Pickering. "We were all scared for our lives."

According to Cityteam Portland Executive Director Mike Giering, an Alcoholics Anonymous meeting had just begun when the suspect came through the door, shirtless. After he was given a shirt, police entered the room and the man began "stabbing himself in the neck."

"Cops did everything right," Pickering said. "I applaud their actions. They actually saved lives."

Investigators are currently gathering more information and Portland Police spokesperson Chris Burley aid all officers involved have been put on paid administrative leave for the interim.

You can watch the graphic video below, via Twitter.

Graphic Video: Over a dozen Portland officers just shot a man inside a homeless shelter the day after the mayor cal… https://t.co/GM3b1b5KtI
— PDX Resistance ✊ (@PDX Resistance ✊)1523167871.0