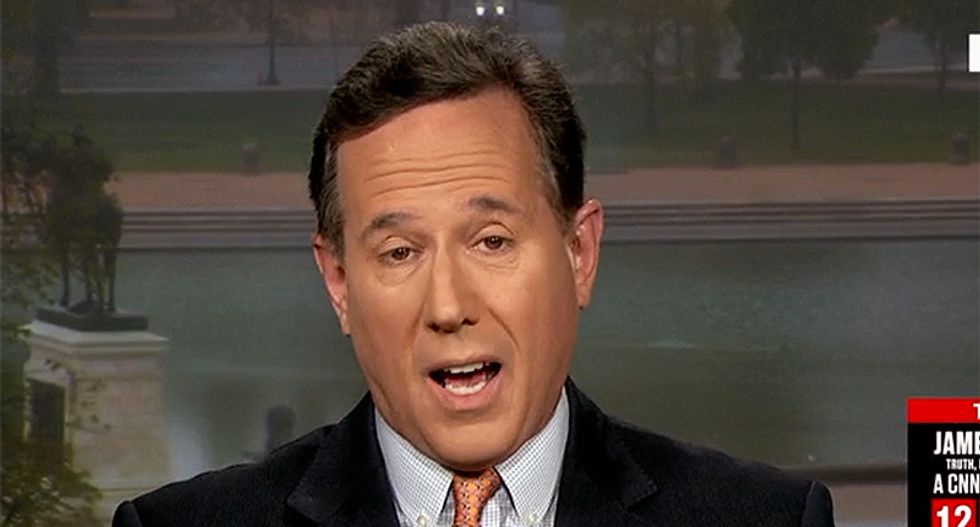 Jackson, who served as the physician on hand for the president, gave Trump a physical and praised the president’s health and fitness in a widely mocked news conference. The president then nominated the physician to head the VA, a government agency Trump has said needs dramatic changes. Jackson has never overseen a vast department, much less an agency.

"Bad fact," began Cuomo. "We should not even be having this conversation. The White House should have made phone calls. They should have known what was out there. They should have been ready to push back when it was raised by somebody. Now leaving it up to Democrats but also Republicans. They were asking for this problem."

Santorum first declared that he doesn't know how the Trump administration could have known about Jackson's past problems. It was part of 20 different military members that came forward, Sen. Jon Tester (D-MT) told CNN Tuesday. The former Pennsylvania senator also tried to argue that Jackson was in a very important position under the Obama administration and that they should have known he was a problem.

"Most of the things he is being accused of happened during the Obama administration with, I suspect, full awareness of the Obama administration," Santorum alleged. Cuomo noted that the statement is not factually accurate, as such information has not been disclosed. "Maybe somehow they didn't know and these are just come up. Would they know? You can say vetting, but here's a man in a position of great power and authority. A personal physician to the president, pretty important position. None of this was known or vetted and certainly not discussed within the on Obama administration."

He went on to confess that the Trump administration should have vetted Jackson, but then qualified, "I'm not sure they didn't and maybe these allegations didn't rise until this thing got out there and all of a sudden people felt maybe some freedom to release this information." Again, however, Tester noted 20 service members had come forward.

Cuomo noted that the Obama administration didn't flag any of this, however, they recommended Jackson for a completely different position. Santorum tried to argue that the position leading the VA was as important as the president's physician. Cuomo countered that the president can see any doctor, go to any specialist or go to any hospital he wants and isn't required to only use Jackson. Chairing an entire agency is vastly different.

"In their current responsibility to put him in a position that is without any estimation exponentially more important than what he is right now, they always should make the phone calls," Cuomo said. "You know you dig into people. The sources that we are hearing from consistently tell us 'I was not contacted about this. They know that I worked -- I expected to be called. I wasn't called.' And this is not the first time, right? Context matters. Consistently we were promised the best of the best and consistently they keep putting people in positions of power who don't seem to be well appointed to it."

Santorum conceded that the Trump White House should have vetted Jackson.

Cuomo noted that this is simply more of the same with EPA Secretary Scott Pruitt's scandals stacking up. Santorum tried to claim that Pruitt was fine because the "ethics department" said that Pruitt was fine on the $50 sweetheart deal for a condo from an energy lobbyist's wife.

It is unclear if he's referring to the Office of Government Ethics, however, former ethics chief Walter Shaub noted that he was shoved out because he had strict ethics rules and it bothered those in the administration. So, they installed their own person to approve the ethics.

Watch the full conversation with Santorum below: