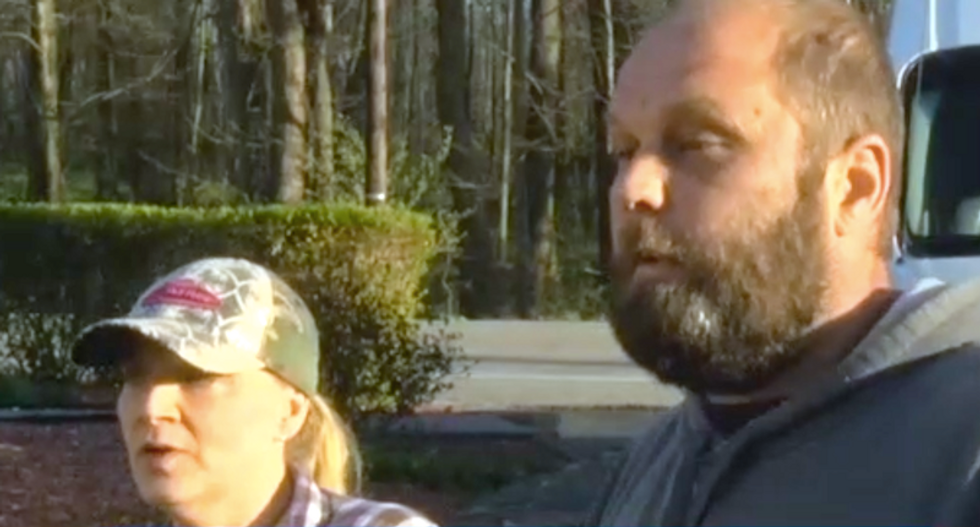 An Ohio man apparently decided his collection of lawn jockey ornaments wasn't racist enough, so he placed afro wigs on them and set them among his Confederate flag displays.

Louie Jones Jr. lives in the Lindale home with his father, and he said the display has been up for years without complaint, reported WXIX-TV.

The lawn jockeys are joined by a black-faced figurine eating a slice of watermelon and a dark-skinned mannequin with an afro wig and large, garishly painted red lips.

“In no way, shape, or form should anybody think that it’s racist," Jones insisted.

The homeowner's friend Tammy helped him explain the demonstration, which she told Fox 19 reporter Maytal Levi had started with the Confederate flags and had grown to include the racist caricatures.

"They went up, a few of them at one time, and then a couple more were added, but the flags have always flown," Tammy said. "That's for our country."

Jones said he was proud to display numerous Confederate flags, which he calls the "rebel flag," alongside the lawn jockeys and a single U.S. flag.

"It's not racist, it's for the war that we won, you know," Jones said.

Tammy clarified that her friend meant the Civil War, and the TV reporter seemed to genuinely confuse Jones when she asked if he believed the North or South had won the Civil War.

"We, as in the North," Jones said, after a pause, and then turned to stare at passing traffic.

Then it was the TV reporter's turn to be confused.

"That flag would be the wrong flag to fly," the reporter said.

Ohio remained with the Union during the Civil War, and Clermont County, where Jones lives, contains 33 historical sites on a self-guided Freedom Trail that includes 19 approved to the National Underground Railroad Network to Freedom.

The village of Lindale is about a five-minute drive from the birthplace of Ulysses Grant, the Union general who negotiated the Confederate surrender and was later elected 18th president.

Tammy explained that the lawn jockey ornaments were intended to honor "the first blacks that played the baseball game," and then she tried to explain the mannequin.

"Like, the mother of the baseball players, basically," Tammy said.

Jones said his family has been threatened over the display, but he had little explanation to anyone who believes he hates black people.

“Everybody hates everybody, you know?" Jones said. "It just depends on what you hate and what you like. It ain’t got nothing to do with race, we ain’t racial.”